What Are You Seeking?

Hey friend! Excited to share with you an excerpt from chapter two of my new book, Who Are You Following?, available for pre-order now! I can’t wait to walk through this book with my friends in the LO sister app, and I would LOVE for you to join me in doing so! Join the book club group inside LO sis today 🙂

In the Bible Jesus’ disciples knew exactly who they were looking for, and when they found Him, they stopped “scrolling” and dropped everything to follow Him. That seems like a wild concept: to be able to just drop your plans in life and follow someone you have never met. But many of us do that all the time without even realizing it. We follow people on social media that we have never met and will most likely never meet, and we begin to change things about ourselves without even realizing we are doing it.

It might not happen overnight, but in time you will start to look like who you follow. You can’t help it. The first time I saw bike shorts, I looked at a friend and said, “I’ll never wear those.” It’s now two years later, and I have three pairs. Have you ever noticed how friend groups all start looking alike? It’s incredible how fast a trend can take hold.

Many of these things are just silly, like fashions, dance moves, or even phrases that come and go, so what’s the worry? We may not be really changing our lives, but this shifting of our values— the things that we once said we would never do and now find ourselves doing—can happen on a deeper level. Maybe it was a thought shift from caring about who God says you are to caring more about who people say you are. Or maybe it was a priority shift from putting others first to only caring about yourself and doing what makes you the happiest. We are all being moved and shaped by the people we follow in much more important things: our beliefs, our morals, our values.

Now, back to the disciples. Let’s read John 1:35–41 to understand why they decided to follow Jesus the moment they saw Him.

“John was standing with two of his disciples, and he looked at Jesus as he walked by and said, “Behold, the Lamb of God!” The two disciples heard him say this, and they followed Jesus. Jesus turned and saw them following and said to them, “What are you seeking?” And they said to him, “Rabbi” (which means Teacher), “where are you staying?” He said to them, “Come and you will see.” So they came and saw where he was staying, and they stayed with him that day, for it was about the tenth hour. One of the two who heard John speak and followed Jesus was Andrew, Simon Peter’s brother. He first found his own brother Simon and said to him, “We have found the Messiah.” (esv, emphasis added) 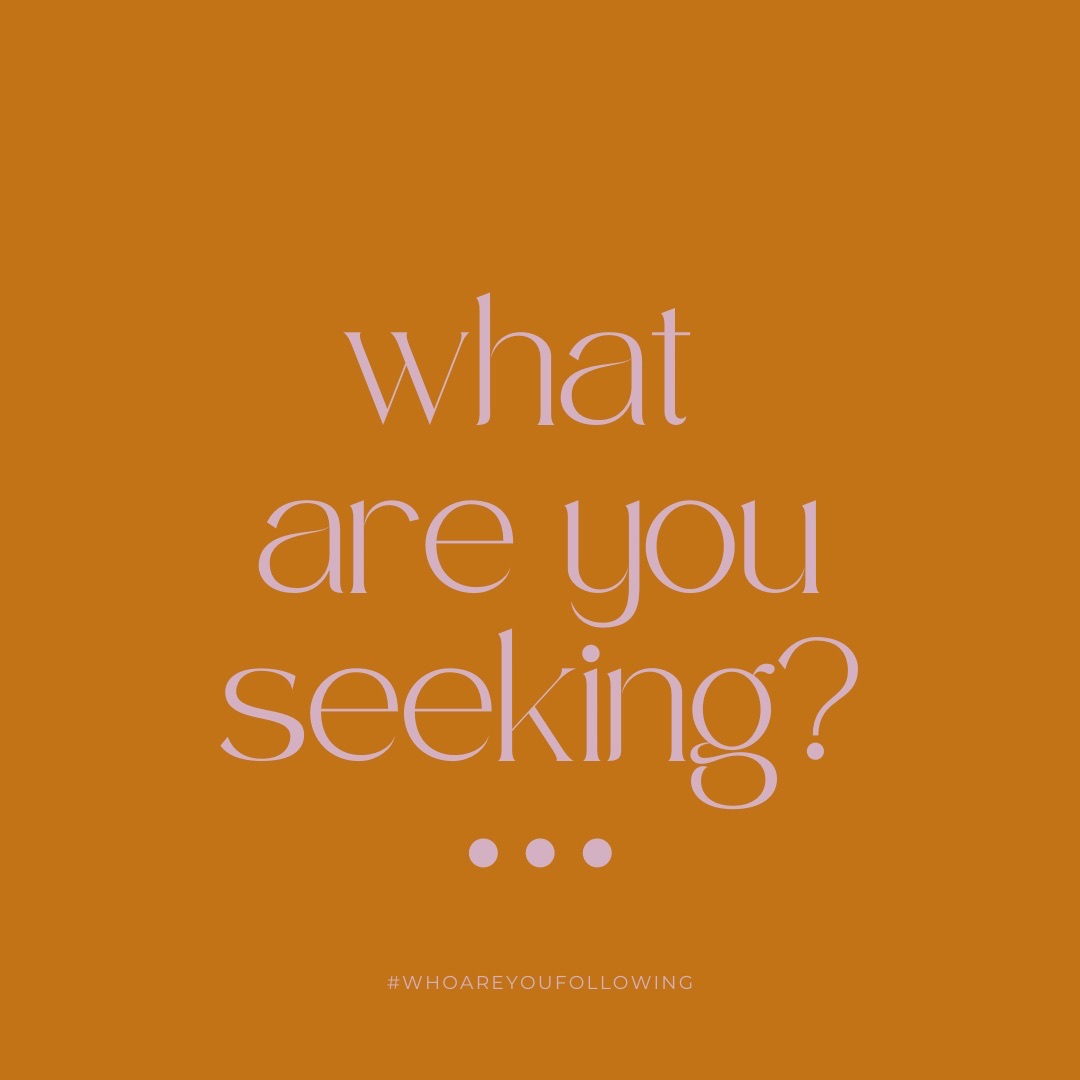 A little backstory so that we can understand the gravity of this moment: For hundreds of years there were prophecies that a Messiah was coming. At this point in history, John the Baptist had been out in the wilderness preaching about the coming Messiah. There were many people who believed and were waiting for the prophecies to be fulfilled. So on this day, when they heard John say that Jesus was the one they’d been waiting for, they asked Jesus where He was staying and immediately followed Him.

Now that you know the context, you can understand why, when Jesus asked them, “What are you seeking?” they didn’t answer with, “We don’t know.” Instead, they said, “We have found the Messiah.” They’d finally found what they were looking for. So they dropped everything they were doing and began to follow Him wherever He was going.

I love how immediately after gaining this following, Jesus turned and asked, “What are you seeking?” He gave them a moment to reflect on their intentions. He sought to make sure that they weren’t just aimlessly following someone because they heard it was cool or because they just thought He seemed legit. They were able to commit to following Him because He was who they were looking for, and they knew He was leading in the direction they wanted to go.

We need to be more intentional about what we are looking for so that we can be intentional about who we begin to follow. This is true not just on social media but also in our real-life relationships, including future friends, spouses, mentors, or work associates. If you do not know what you’re looking for in a future spouse, you will end up in situations you never imagined yourself in. If you don’t know the kind of person you want to be friends with, you may join friend groups that lead you away from your desired version of yourself. If you don’t know the job you want, you may sign up for whatever opportunity comes your way, even if it’s not helping you move toward your goals. The disciples set the best example for us because they knew what they wanted and where they wanted to go—and so the second they saw Jesus, they dropped everything else and started following Him.

Matthew 6:33 says, “Seek first the kingdom of God and his righteousness, and all these things will be added to you” (esv). Notice that the verse does not just say to seek the kingdom, but to seek the kingdom first. Many of us may have Jesus on our list of things we are following, but if we are honest, He is nowhere near first place in our searching, and then we wonder why we don’t experience the goodness of His love and the life that He has for us. We want the blessing of Jesus, but we don’t want the commitment of following Him. This verse tells us all these things will be added to us if we seek Him first. So it’s as simple as can be: if you seek God, you will find the things of God. Whatever you seek you are going to find, so the question of “What are you seeking?” might be the most important one to answer.