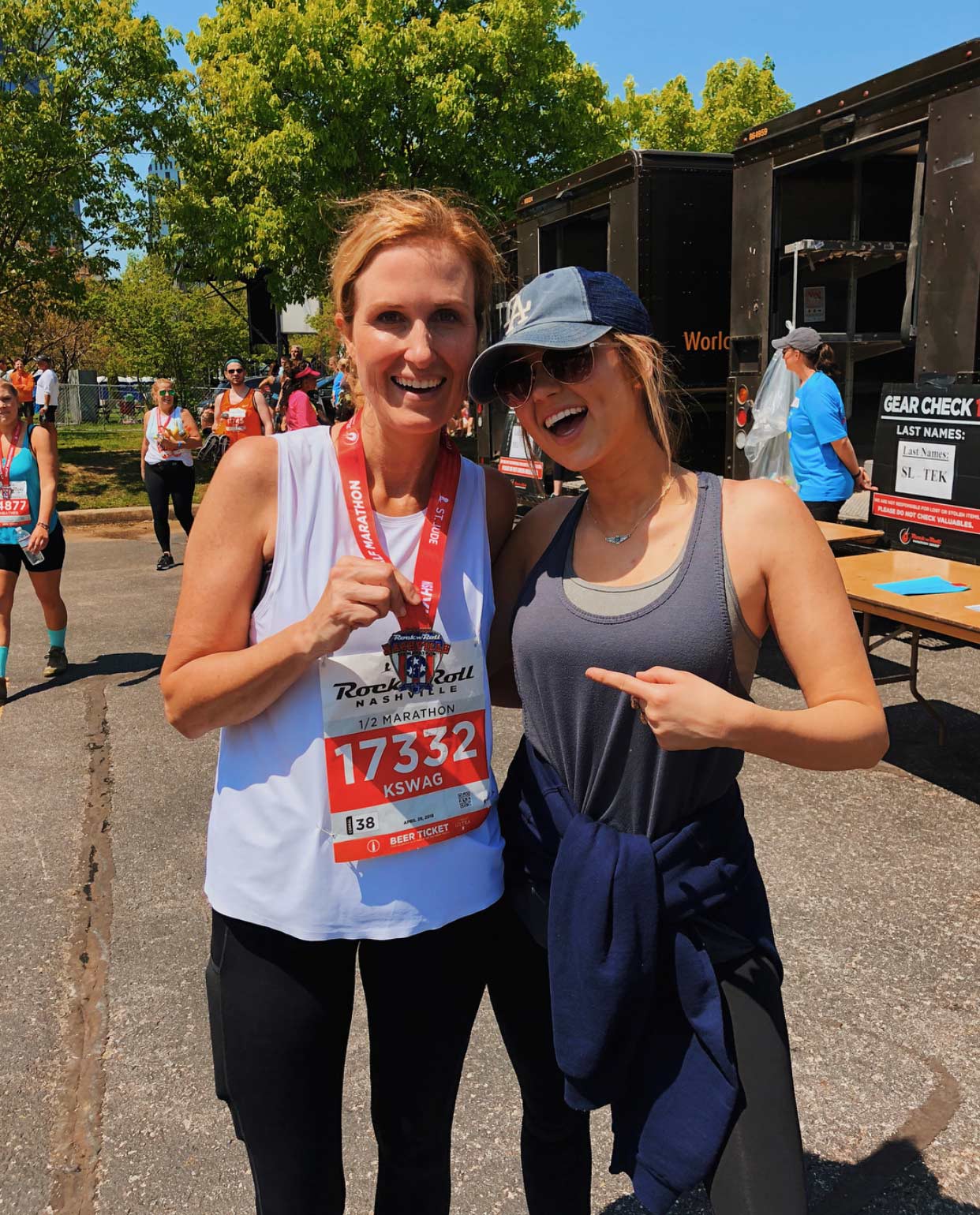 I have never been a runner, just the thought of running makes me tired! I am not trying to be dramatic, but people who like to run are like immortal to me. I just stare at their toned legs, with a confused look at the muscles I did not even know existed and admire their outfits. I have tried to buy the clothes to inspire me, but it just doesn’t do it. One of the definitions of running is, “moving in a hectic and hurried way”. This is relatable, because I don’t look like a gazelle when I run–I look like a sweaty, out of breath, panic attack with legs. If you ever see me running, you should start running too, because I’m probably running AWAY from something. I think you get the point. It has always been my least favorite form of exercise.

When my mom first asked me to run a half marathon, just pondering this thought in my head of me running in a half marathon…with all of these immortal super humans made me laugh out loud. It also brought a flash back to the time my track coach put me in the 2-mile race as a sophomore and I got overlapped by all 6th graders.  As each person overlapped me, I was faced with the daunting realization that I am about to have to do the last lap by myself with everyone watching. Que the prayer: Jesus, take me now. Like I said, “not dramatic at all.” 🙂

I was so embarrassed and honestly exhausted. As I ran across the line to take that last lap, the nicest human on the planet, John Luke Robertson, my brother himself ran out on the track and joined me in the last lap—all while playing it’s the heart of a champion (my favorite work out song) and got the crowd going. It went from being this overwhelmingly daunting, embarrassing lonely race, to one of the best and most hilarious memories of my life. And to be honest, when he came out, it was like he came with strength, energy and life to give to me.

At times, life can feel like that last lap, right? You’re tired, you’re out of breath, you do not see much value in even running it—because the winners are already announced, and it can look lonely if you let it. You get physically exhausted, you get mentally exhausted and you get spiritually exhausted when you try to run in the 21st century Marathon alone, and sometimes, it seems like there is no end in sight. Everyone around you and on social media seems to be succeeding, everyone seems to know what direction they are going…and you are sitting there wondering, “God why do I feel like I’m running alone, and what is my purpose for even running? My run really doesn’t matter.”

“Therefore, since such a great cloud of witness’s surrounds us, let us throw off everything that hinders and the sin that so easily entangles. And let us run with perseverance the race marked out for us…”  Hebrews 12:1

When my mom asked me to run the race with her, I had actually said yes. Laney, John Luke and I all signed up, but right before, I fractured my foot and couldn’t run. Laney had to back out and John Luke had to go on a last-minute trip, so my mom realized that she had to do this race “alone”. I thought for sure she would back out as well. She did just the opposite and set an example to me that I always hold on to and learn from. She said these words, “I did not sign up for this race for y’all, or to do it with y’all. I did this because it was something that I wanted to do.” God put inside of my mom a desire to accomplish a half marathon. It was the race that was marked for her, and we all got to go and cheer her on while she persevered through each mile. I cried proud tears and was left so inspired by everything I saw.

I realized that the day of the race it was such a race of unity. There were people from all over running in the same marathon together with the same end goal to cross the finish line, but every person had a different motive and/or purpose for running it. In life, I like to believe all of us have the same end goal in mind to cross the finish line— fulfilling the purpose that God has set before us to the fullest. But sometimes, in doing that, it can actually look like a lonely path, if you’re looking at it through the world’s perspective. The originality of your specific purpose might look different than everyone else’s, but I want to encourage by saying this: there are a lot of people running the marathon, and a lot of people cheering you on. And if you find yourself walking down a path alone, it is not to isolate you. God is running with you, creating something new that is different than purpose of the person beside you. My mom admitted after the race that right before she started running, she got a little sad that she was doing it alone and it made her a little nervous. But then she said that along the way, it was the kindness of strangers, the desire for others to succeed and the encouragement by everyone that made the race so fun.

“For I know the plans I have for you,’ says the Lord, plans for peace and well-being and not for disaster, to give you a future and a hope.” Jeremiah 29:11

“But those who trust in the Lord will renew their strength and renew their power, they will lift up their wings and rise up close to God like eagles rising towards the sun, they will run and not become weary, they will walk and not grow tired.” Isaiah 40:30

These are promises of strength, so that you will not get too exhausted to run the race He has set before you. In fact, you will become even more passionate about the purpose behind why you run. There are gifts and creativity you will reach along the way of your run with Him. There are promises and provision to grab hold of as you run. God’s desire for you is to reach all of them along side of Him, so that as you run, you can give life to the world. The race is worth the run. Mom said at one point, this lady handed her on orange—it was the best orange she had ever had in her life and it gave her energy to finish. God is going to hand you gifts that will be the best you have ever received and it will give you strength to finish. You are not alone. I am cheering you on as a sister, and God is running with you as a father. Keep running. The world is better because of it.