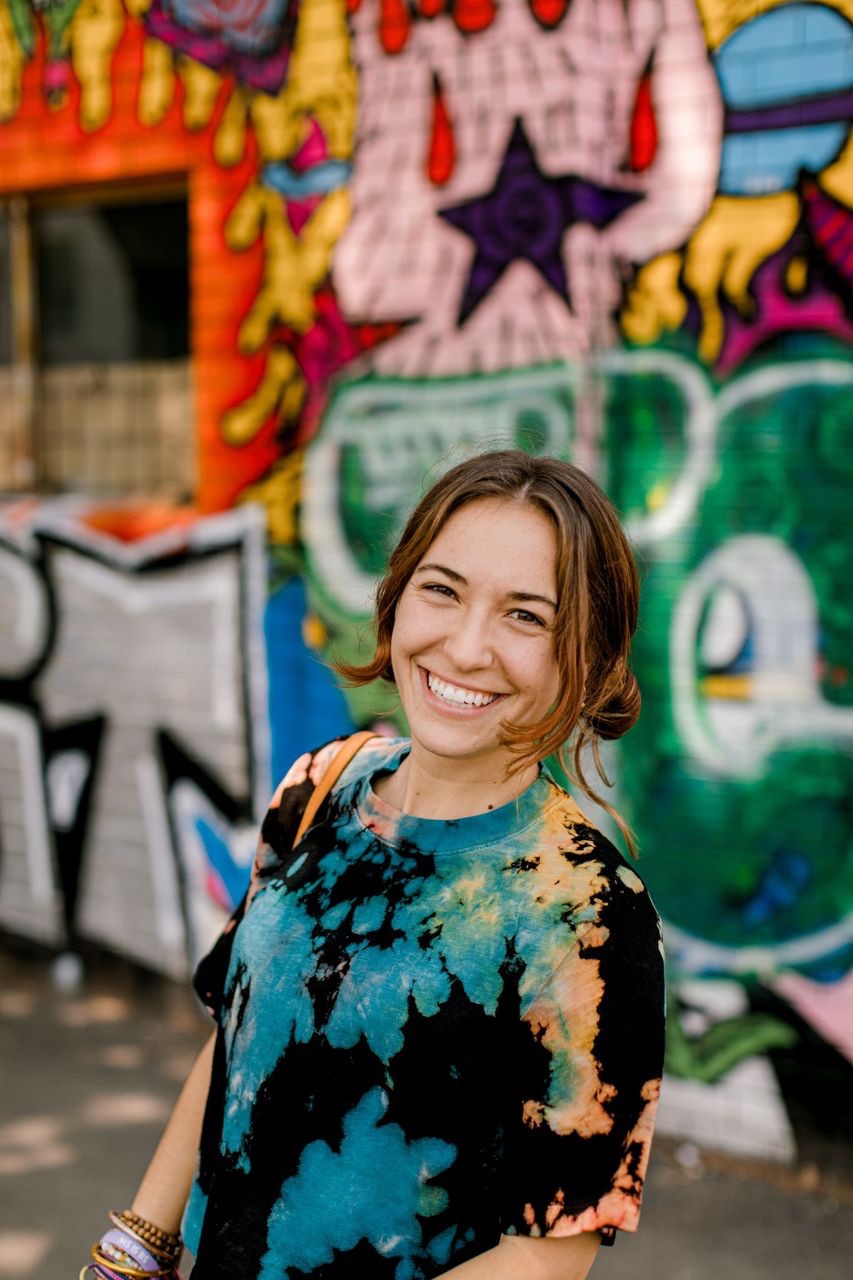 It was such an honor to have Lauren Daigle on the “WHOA That’s Good” podcast a few weeks ago. So good that I decided to write a blog about it!

God is so intentional about who he puts in our lives, and Lauren is one of those people who God placed in my life to make me fall more in love with Him. I remember sitting behind Lauren at the Dove Awards back when I was there for Duck Dynasty. I wasn’t really into the Christian music world and because of that, I was very timid when I worshiped. I never raised my hands or felt truly free to do so. But that night, I watched Lauren just worship so freely with her heart abandoned to the Lord. I remember thinking to myself, “Wow I want to have that freedom whenever I worship.” And now today, I could care less what people think and I am so free when I worship, and to see that influence from Lauren impact my life today is so cool.

When I asked Lauren what’s the best piece of advice she’s ever been given, she said that a guy on tour who was going through a hard season at the time and told her that, “True freedom is giving people the permission to misunderstand you.” WOW. SO GOOD.

As Lauren dove deeper into the meaning of that advice she was given, she told us that, “Whenever you think about people who could be offended by being who you are, it can cause you to limit your expressivity or who God really created you to be.” When we’re constantly looking over our shoulder and trying to think about if people will like us for being a certain way, it can be so hard to TRULY be who God has called us to be. But when you’re identity is found in God and you know that He has uniquely created you to be exactly who you are, you start worrying less about what other people are thinking, and you start remembering what God is saying about you.

Lauren gave an example of living this out. In interviews her words really matter, and she will be held accountable for them which can be stressful sometimes. If she messes up, it could be so easy to walk away and toil and spin and dwell on that mess up, OR she can walk away and think, “Well there was a moment of humanity that slipped in there and thank God for His goodness because he knows my heart.”

If we take this concept on a smaller scale when you’re getting ready in the morning and thinking about what to wear. Are you choosing your clothes to fit what you want others to think about you? Or are you choosing them because you like them and you want to be free? Caring about what others think about you isn’t bad in of itself, but it can be harmful when it takes away from who you are and who God created you to be!

When you give people permission to misunderstand you, it’s saying “This is what God placed inside of me. This is the way that God wired me. These are the truths I stand upon. But if you misunderstand me, it’s ok, I will love you anyway.”

If you know Lauren, you probably know her song “You Say”. I couldn’t go through the podcast without asking the back story of where these words came from. We really came full circle when she answered this. This song actually came from the Dove awards where I saw Lauren worshipping! Again, God is so intentional.

Lauren said she remembered feeling like she was getting away from who she once was before all the lights and cameras and fame. She felt like she was longing for home. She said, “I was right on the cusp. I walked in and told my producers that I can’t change who I am to fit what people want. I just genuinely missed my Louisiana self being low key and being simple.” 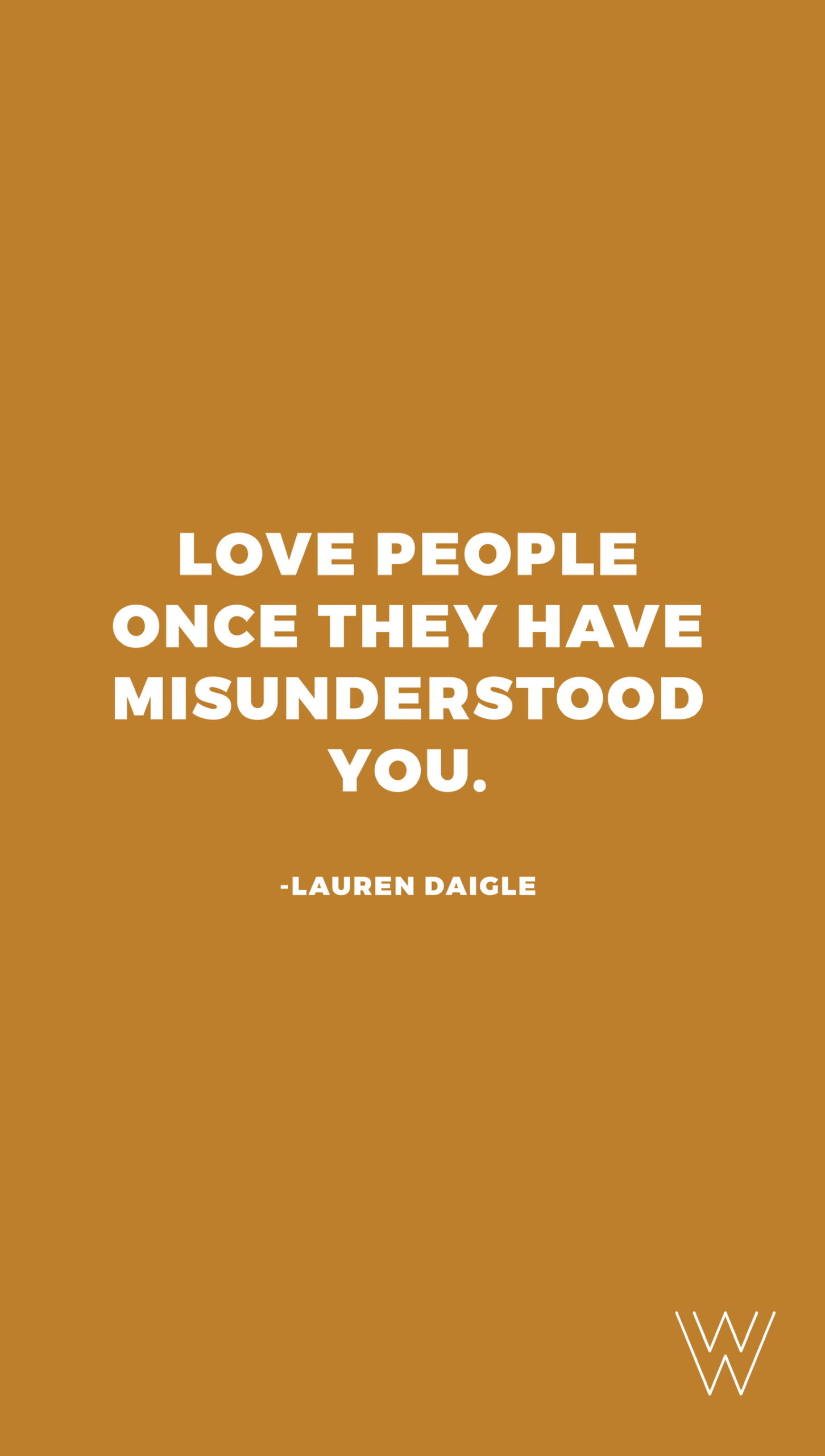 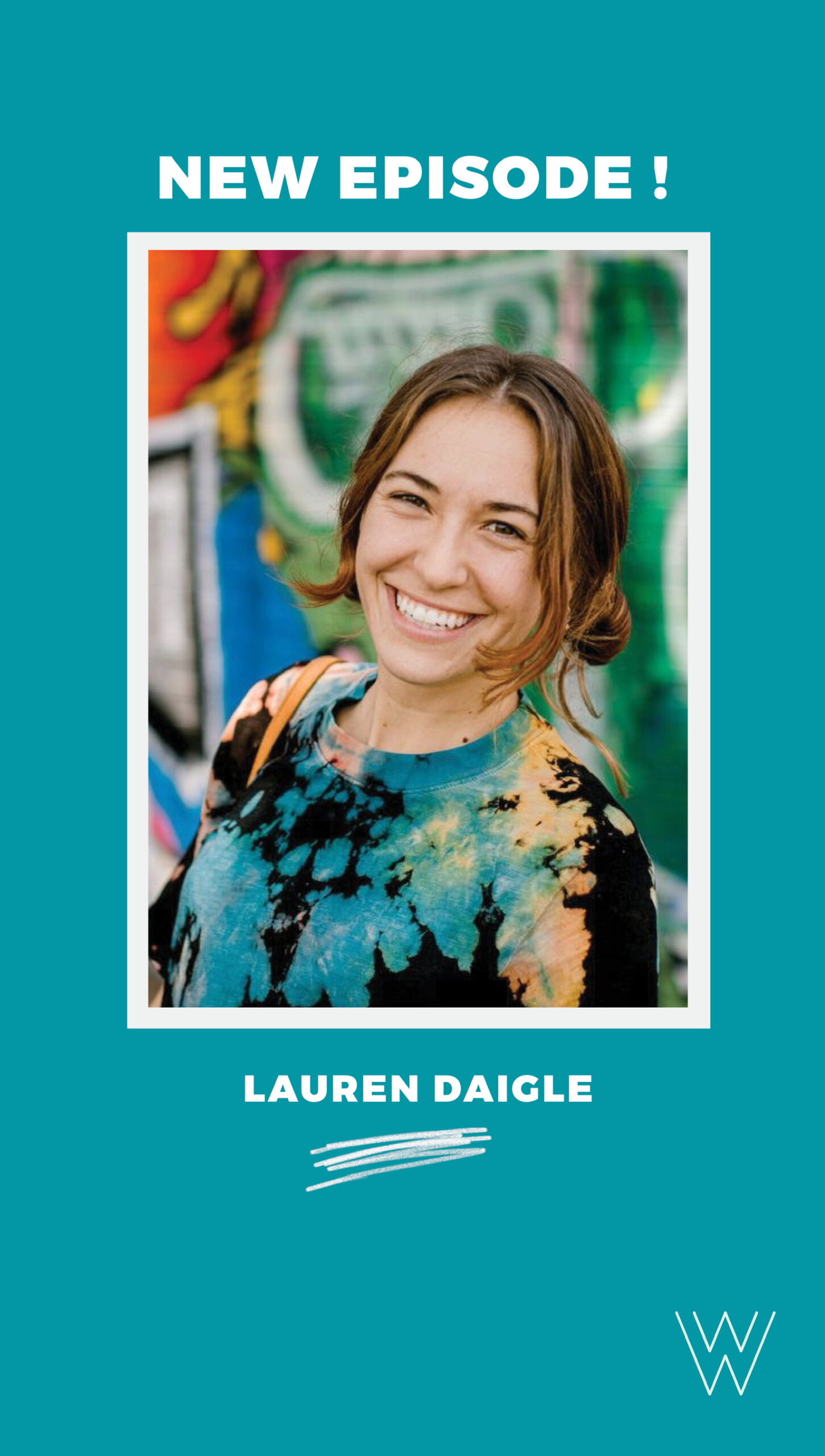 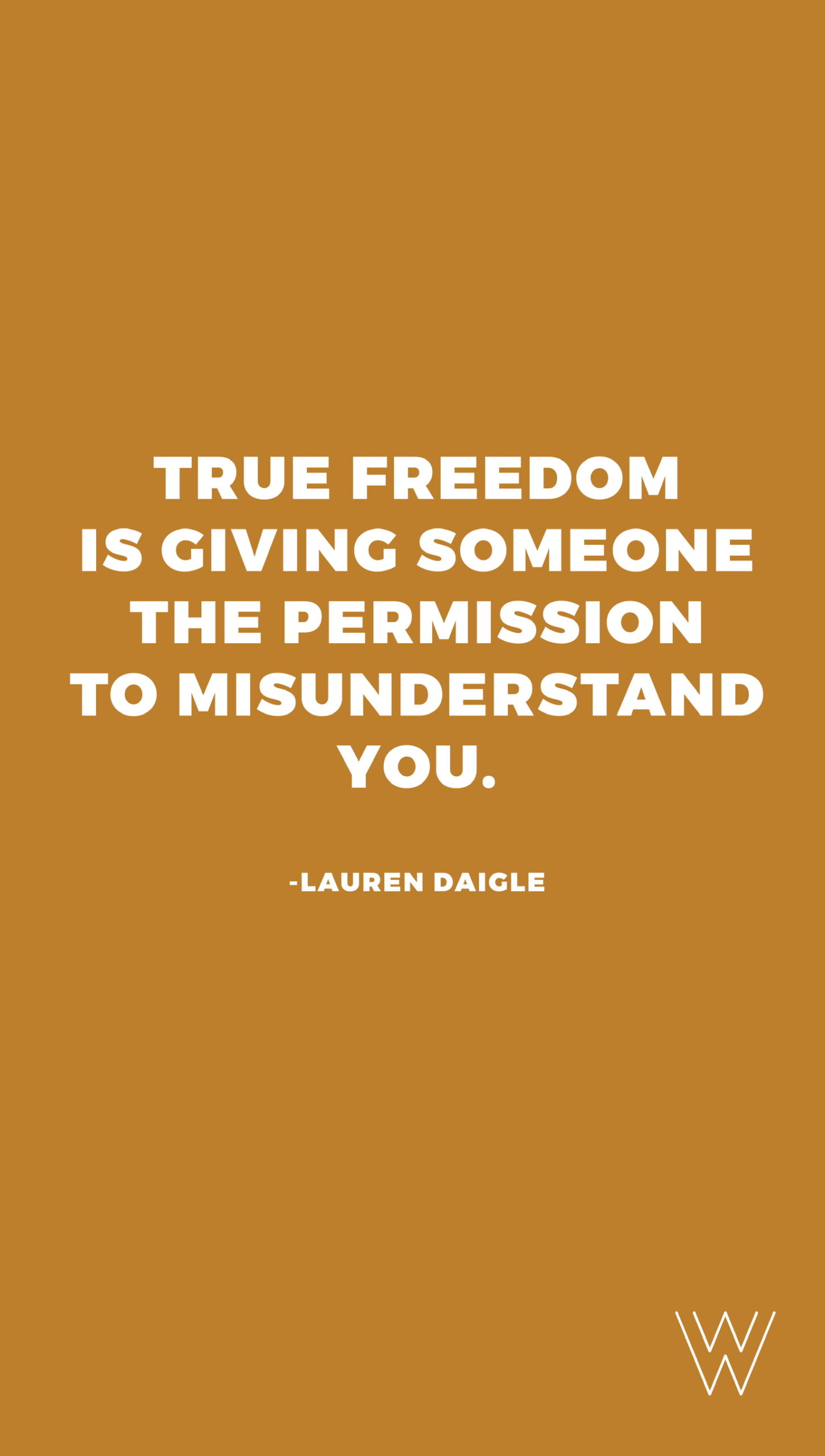 I feel like a lot of us can relate to this feeling when change happens. feeling lost in the shuffle when in a high demand and high-pressure environment. Lauren’s producers told her to replace all the lies with truth and that’s exactly how “You Say” was written.

I related so much when Lauren walked me through that journey. When I got back from Dancing With The Stars, I felt this tug of just missing my old life as well. I was questioning everything God was doing because I felt so far from where I came from. It made me question God’s plan for me, but when I prayed and listened to God, I could have never imagined what He had in store. That song just meets everyone where they are at. We all wrestle with our identity and “You Say” is an anthem for what God says about us and such a good reminder when we feel lost or are confused about who we are.

I also touched on 2020 in the interview with Lauren. This year has been so unpredictable and crazy and I wanted to know how she remained her fun, bold, and free self during all the changes and uncertainty.

Lauren was expecting to be on a world tour this year. Talk about a crazy shift! She said this year hasn’t been easy, but she has spent time talking to God about it and really asking “why?” She was on a path where she was meeting the apex of her career and was meeting the full potential of her dream! She said, “I remember asking God, why was the rug ripped out from under me.” And God just slowly started to reveal to her the goodness that has come out of this season.

As Lauren’s grandma says, in these scenarios, it is about “making lemonade out of lemons”. We need to find the positive in the negative!

Lauren said it perfectly when she said, “God always has a way of always giving back what we think has been stolen.” She may not have been on her world tour, but she got to reconnect with old friends and build a genuine and true connection with a community that will be there to support her always. She is able to spend time with her family which is hard to come by these days. Lauren asked God to show her the lemonade in the situation, and she got it.

There are moments, especially this year, where it’s easy to get caught up in the anxiety of the unknowns and changes. This is when we ask God for help and He will show us the lemonade when were handed lots of lemons!

God will carry you from one point to the next if you let Him in. In this season more than ever we need to seek, and we will find. To seek God in the midst of all this chaos can be hard, but when we do, He will always be there to remind you who you are.

Don’t underestimate what God has put in you during this season. Because God can use those little talents and passions that you might think are nothing, in such BIG ways if you allow him to.

It was my prayer and dream that the Lord would send a fresh revival in London. I was supposed to be there this summer and I was so confused as to why this prayer and dream was just canceled when it was so clear that’s where God wanted me. But I heard God say to me that even though everything is canceled, my prayer is still on! Just because I’m not in London, doesn’t mean God isn’t doing big things there and bringing revival to their people.

I want to end by encouraging you all during this season to really press into the Lord to see what He has to say to you. Ask him the hard questions. Let Him show you your passions, dreams, purpose, and allow Him to give you your identity.