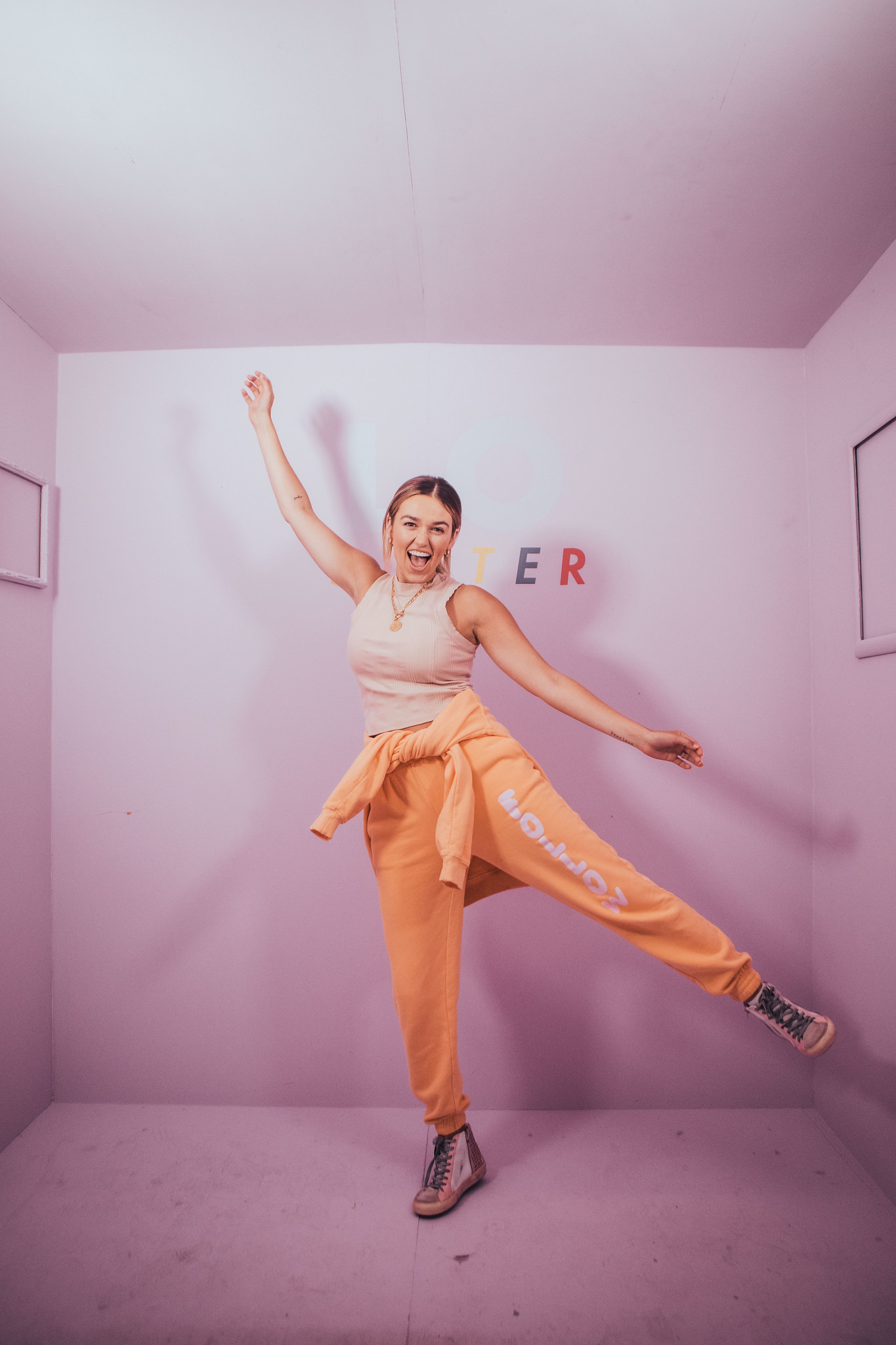 We all know how real the lies of the enemy can be. But I want to take this opportunity to talk about truth. And it got me thinking about this story from the early stage of mine and Christian’s relationship. Let’s be honest. My husband is amazing. He is so sweet and kind. He is a man of God. But we all have our things, right? So, I want to share a moment with all of you.

It was our first argument and it was a big one. I’m not going to lie. We had been dating for about six months and everything at that point had been going well. We’re sitting at dinner and he’s telling me that his best friend just got a girlfriend and how amazing she is. So, I go to follow her on Instagram and instead of being on her main feed I ended up on her tagged photos. Long story short, this girl I don’t know at this party I don’t know about has my boyfriend’s arm around her. And I’m like, “Hold up. who’s this?” and “Where was this?” And his first response to my questions was, “I told her not to post that!” Okay, that just got a whole lot worse. So, we go home and it’s really awkward. Then I get all dramatic with the “I don’t even know if I can trust you” and “I don’t even know about this relationship.” You know how it goes.

Apparently, it was a going away party and Christian just stopped by and the girl jumped in a picture with him. But come on, you would be investigating too, right? Well, of course, love keeps no record of wrongs. Gotta let it go. So, I decided not to bring it up anymore. Then, nine months later, when we’re two months away from being married, I wake up from a nap and Christian is sitting there shaking. He said, “I have to tell you something. I lied to you. I didn’t actually tell her not to post it.” He further explained that he thought if he’d said he told her not to post it that it would make the situation better. But it actually did the opposite. So, what seemed like some huge deal ended up being nothing at all because of one little lie. And I think that happens a lot. All the sudden we’re so confused and we don’t even know where we’re at and it all circles back to some initial little lie. And sometimes the thing is, it’s hard to say the truth because it’s awkward. Sometimes the truth is even offensive. But on a more real note, the truth is actually loving.

However, in our generation, I don’t think telling the truth is really our problem. I think the hardest thing for us is actually knowing what truth is. Because everyone has their own truth, right? And it really is leading us down a bad path. Urban dictionary defines “my truth” as:

A non-negotiable personal opinion. This is a convenient phrase for avoiding arguments because people can contradict your opinion, but they can’t contradict your truth. This phrase is often used when seeking to justify a personal stance or action because you’re not allowed to argue with someone’s truth.

That’s a scary way to live when we are so entitled to our opinion that we change it to our truth so that no one can tell us that it’s wrong. It’s actually very confusing when we don’t have a standard for truth. Because if nothing is true, then questions arise such as what even is love or what even is confidence. It’s weird because you could tell someone they have food in their teeth and them deny it because of “their truth.” But it doesn’t change the fact that there’s food in their teeth. Proverbs 12:5 says this, “The fool is right in his own eyes, but the wise man listens to advice.”

I don’t want us to be a generation of fools believing we’re right all the time. I never want us to get so confused and lost all because we aren’t willing to confront ourselves with the truth. I want to bring up a moment in the Bible whenever the truth was all up in the air and everything was confusing. At this point, Jesus had been arrested and the Jewish people were fed up with Him. They were convinced Jesus was not their king. They wanted to get rid of Him. But in Jewish culture they couldn’t kill. So, they thought if they told the Roman government, Pilot, that this guy was trying to be king, that they might think He’s trying to pose a threat to their empire. Then they would kill Him, because in Roman culture they could crucify. In summary, they were planning to mold Jesus’s story into a little lie and make them think He’s so terrible so they would kill Him. But the story goes on to judgement from Pilot. Pilot is confused as to why Jesus is there in the first place as He was a Roman and Jesus was a Jew. 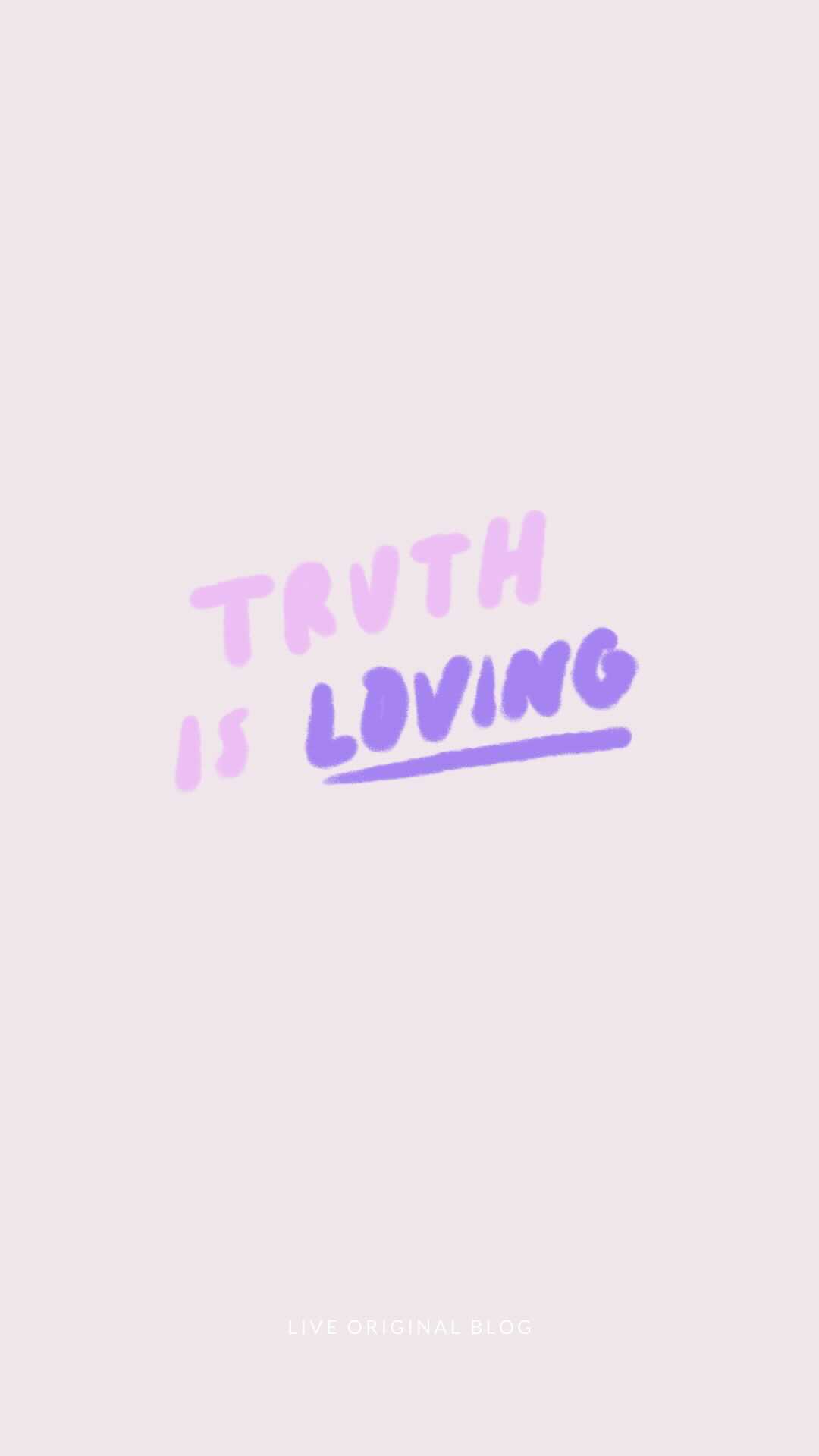 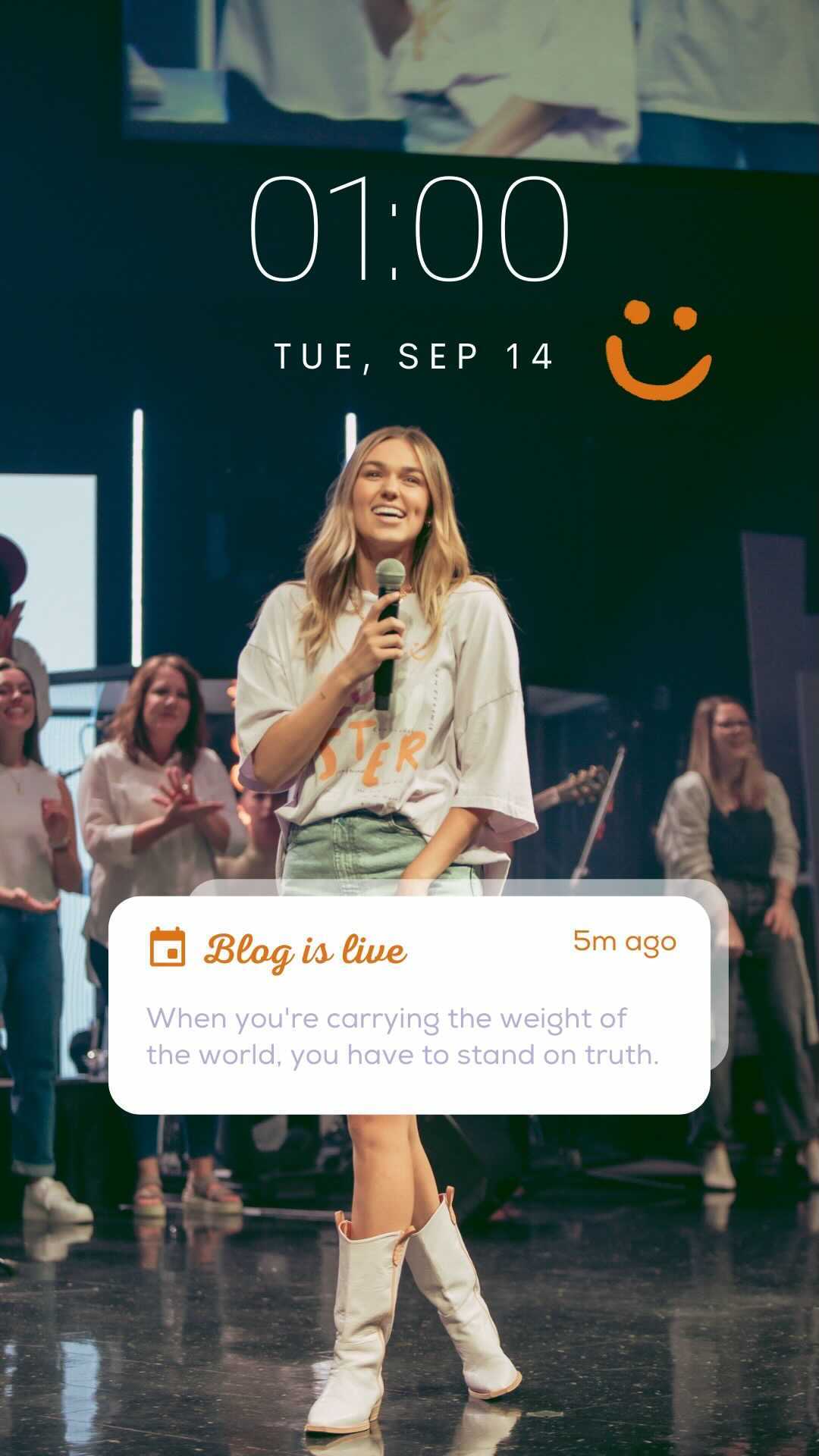 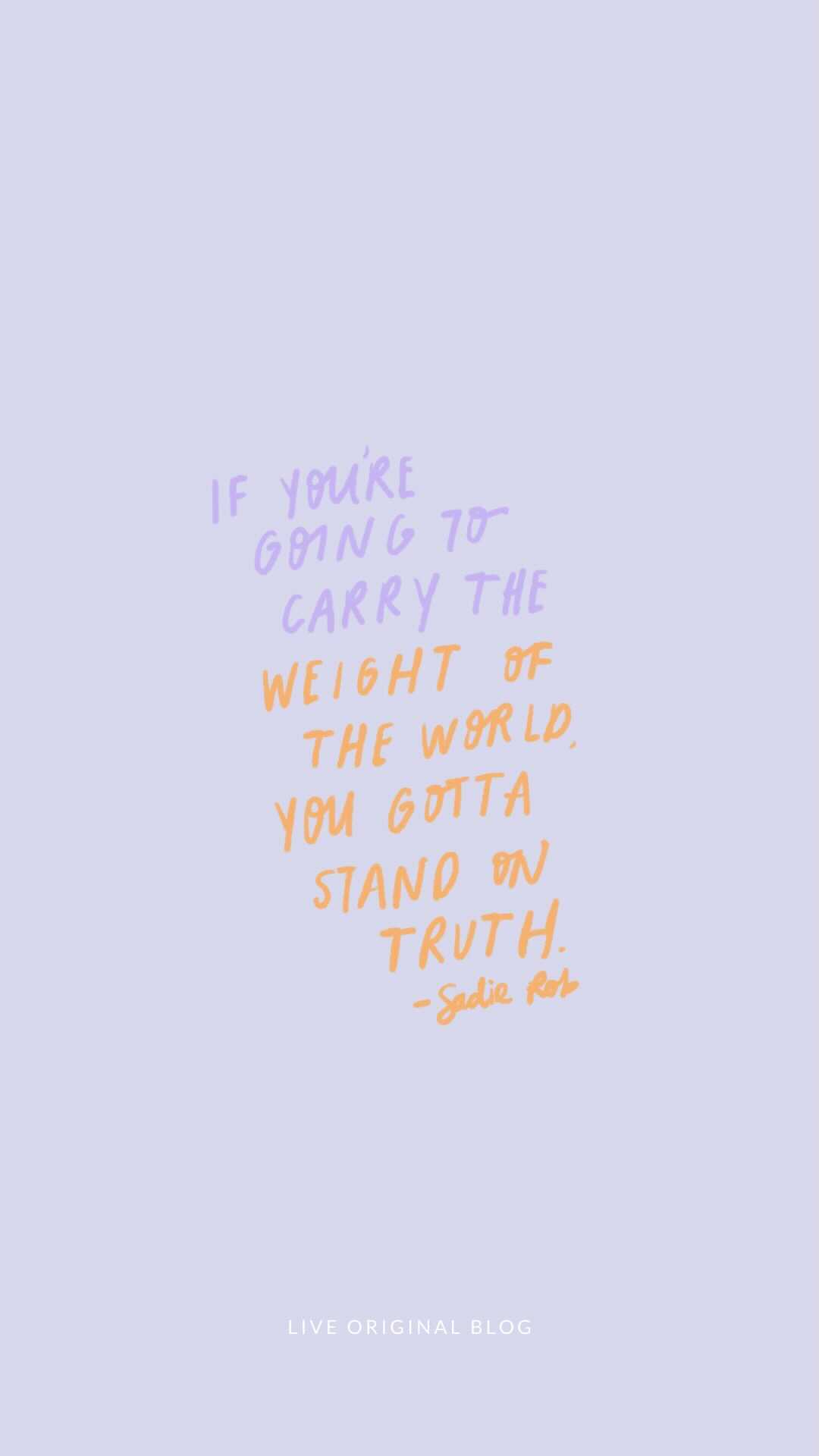 “So Pilate entered his headquarters again and called Jesus and said to him, ‘Are you the king of the Jews?’ Jesus answered, ‘Do you say this of your own accord or do the others say this about me?’ Pilate answered, ‘Am I a Jew? Your own nation and chief priests have delivered you over to me. What have you done? Jesus said, ‘My kingdom is not of this world. If my kingdom were of this world, my servants would have been fighting, that I might not be delivered to the by the Jews. But my kingdom is not from the world.’ Then Pilate said, ‘So are you a king?’ Jesus said, ‘You say that I’m a king for this purpose I was born and for this purpose I’ve come into the world to bear witness to the truth everyone who is of the truth listens to me. and Pilate said, ‘What is truth?’  Pilate went away he went outside to the Jews and told him I find no guilt in Him.” (John 18:33-38)

So, Pilate at this point kind of established his truth by saying he doesn’t seem guilty nor poses a problem.

“You have a custom that I should release one man over to you at Passover. So, do you want me to release to you the king of the Jews?” (John 18:39)

And I love how he says it. He’s like, “So this is obvious right? We’re going to release the king of the Jews because who cares he’s not really posing any threat. In fact, He’s actually healing people. Making the blind see. Turning lives around.” But no, all said not this man. Barabbas. And Barabbas was a robber. I mean is that not crazy!? And that’s what our feelings do sometimes. It’s like, I would actually rather not have the thing that makes me uncomfortable. I would rather have the thing that’s the worst thing for my life.

As we know the story goes, Jesus was crucified which means Pilate changed his truth to what the majority said truth was. And I think that that’s really happening in our day. If everyone says it’s true it’s got to be true. Oh I saw it on tiktok. I saw it on Instagram. It’s definitely true. Without even thinking does this actually benefit my life, we just take it as our truth. It impacts our lives in bigger ways than you think. We choose things that are more comfortable in a moment than doing something that’s best for us in the long run. And it’s funny because we don’t do it sometimes in the obvious thing. If you fall and you trip and you get a big gash what are you going to do? You’re going to put alcohol on it. You’re going to have surgery. You would do whatever you need to do even though it hurts stings. You’d rather endure the sting of a moment than a lifetime of infection, right? But we don’t do that in our spiritual life. Ephesians 6:13 says, “Therefore take up the whole armor of god that you may be able to withstand the evil day. And having done all that you can do to stand firm having fastened on the belt of truth.”

Let me tell you something. Truth is not comfortable. My daughter, Honey James Huff, is the CUTEST thing in the world. She hates the car seat because it’s uncomfortable to get in. But you know what I don’t do as her mom? I don’t say, “Oh you are so uncomfortable. Let me take you out.” No, I put her in the car seat even though she’s crying and I strap her in because it’s saving her life. You know what Christian told me the other day? He said he wears a belt around his waist at the gym for support and to protect him from getting hurt. You know why we need the belt of truth in our life more than ever? Because we cannot stand firm against the lies of the enemy right now unless we have a belt of truth. If you’re going to carry the weight of the world you have to stand on the truth of God. We all know the phrase, “truth sets you free.” It’s actually not true when many people say it. Not all truth sets you free. THE truth sets you free. Your truth doesn’t set you free. The truth that came 2000 years ago and died on a cross and actually can carry the weight of your sin sets you free. In John 8, Jesus said,

“Truly truly I say to you, everyone who practices sin is a slave to sin. The slave does not remain in the house. The song remains in the house. So, if the son sets you free you are free indeed.” (John 8:34-35)

You know what the enemy does these days? He gives us lies daily. He says “Oh you overslept today? You’re not really where you want to be in your life. You’re worthless.” Man, all of a sudden, I’m absolutely worthless. I’m going to be very real with you because I see this happening too much to not say it. We love our best friend. She’s awesome. I love my best friend. She’s so beautiful. Wait am I attracted to my best friend? Well, there was that one time whenever I thought that so that must mean that I’m this. Oh wow yeah that must be true. I’m just going to follow this new truth because this is my new truth. And now why am I so confused because it sounded true at the beginning. But there was a little lie there that took a turn. And when we don’t allow the spirit to convict us and to stop us in the moment to have discernment to hear the voice of the enemy rather than the voice of God, we start to change our whole identity.

Think about where you’re at right now. Do you have truth living in you or do you feel like a thief has come and destroyed your life? Now I want to tell you something powerful. If you’re sitting there right now and you’re saying, “Man I’m living with Barabbas. I have chosen what the enemy spoke over me. But today I want to choose Jesus.” You can. Take a moment in your heart where you make the decision that’s going to be life-changing. You no longer choose Barabbas. You choose Jesus.

Friend, I encourage you to watch this full message on YouTube and let Jesus speak truth into your life today!