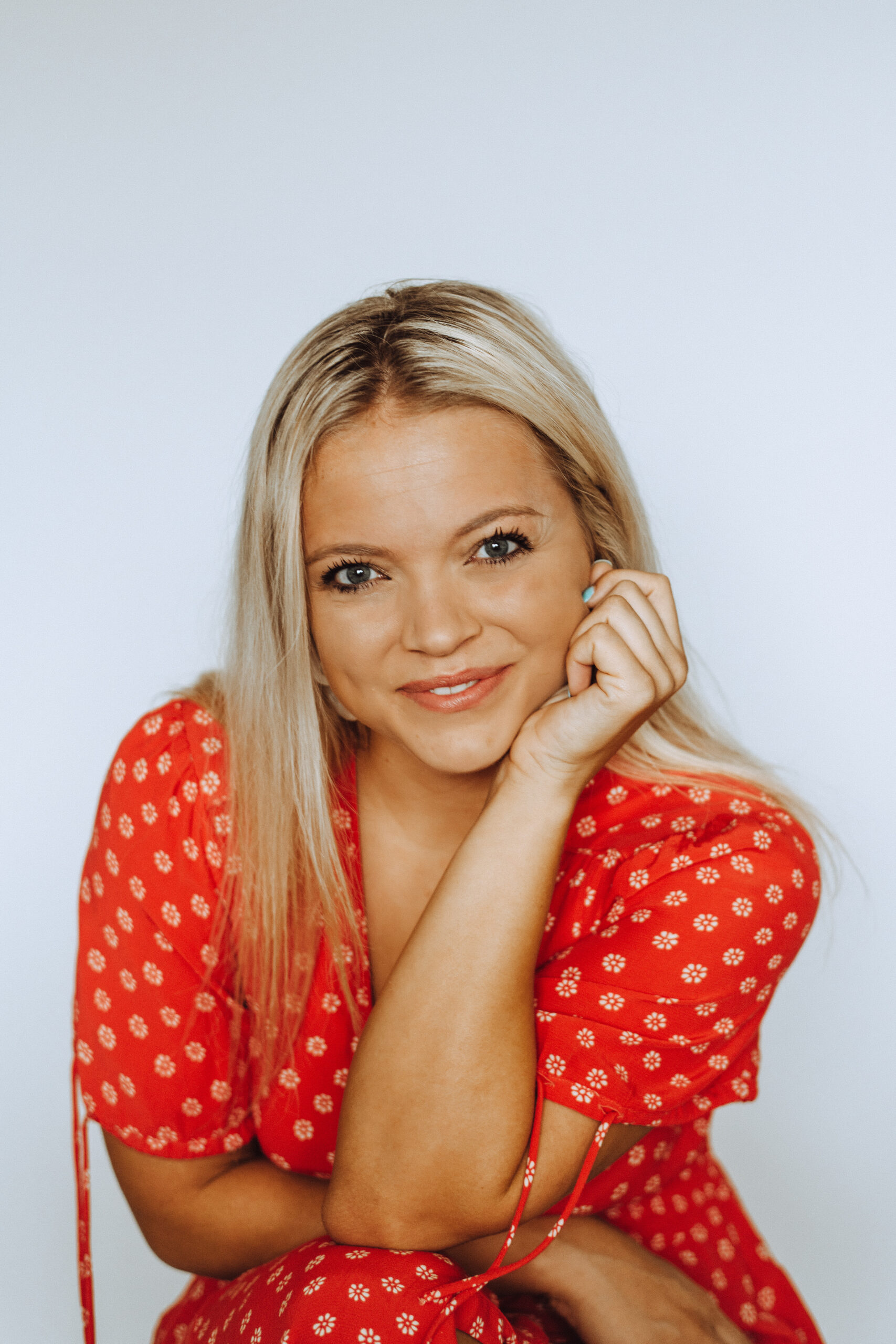 If you’re anything like me then you’ve struggled with comparison. I love that the word of the month for Live Original is sisterhood because so often I treat other daughters of Christ as opponents instead of sisters.

Throwback to high school for instance…

One time my friend’s ex dated someone new. We did what many girls do. We stalked the new girl and compared her to my friend…

“YOU’RE PRETTIER THAN HER.”

Downgraded according to Urban Dictionary means:

“When someone goes from having something relatively good to something that is worse than the original. Often used with boyfriend/girlfriends.”

So basically I called some random girl who probably is a sweet girl with dreams, a family, shares the same Creator as me, and has insecurities like me….uglier than my friend. I compared my friend to a girl she didn’t know. I created tension between two girls who did not even know each other.  Two girls who are actually sisters in Christ. I thought comforting words were: “you’re prettier than her.”

I look back on that night and I get so convicted by my sin. But the truth is I’ve noticed this same conversation happen with girls of all ages, including moms. We compare each other instead of love each other. We compare ourselves and find ourselves more insecure than before. 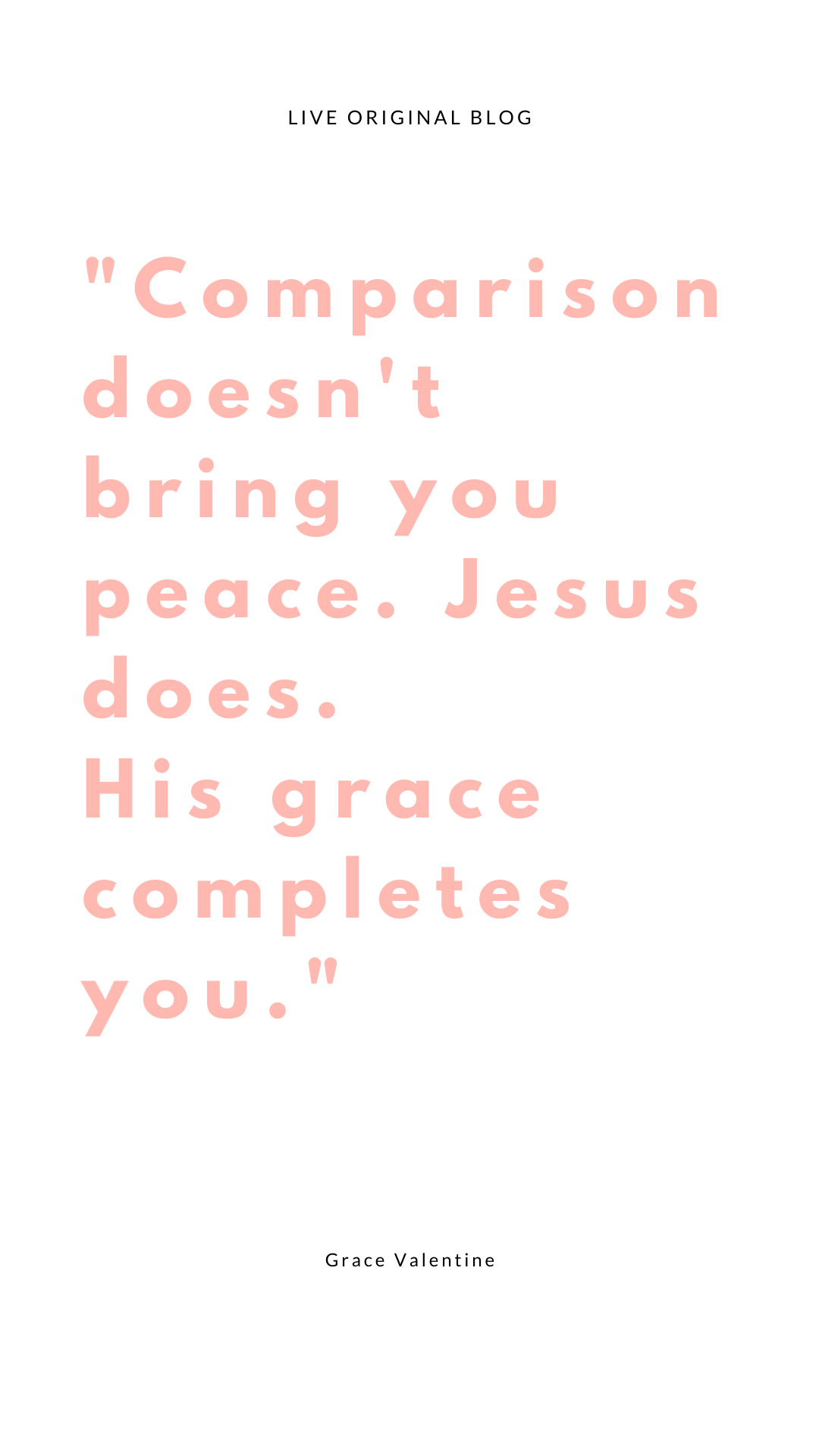 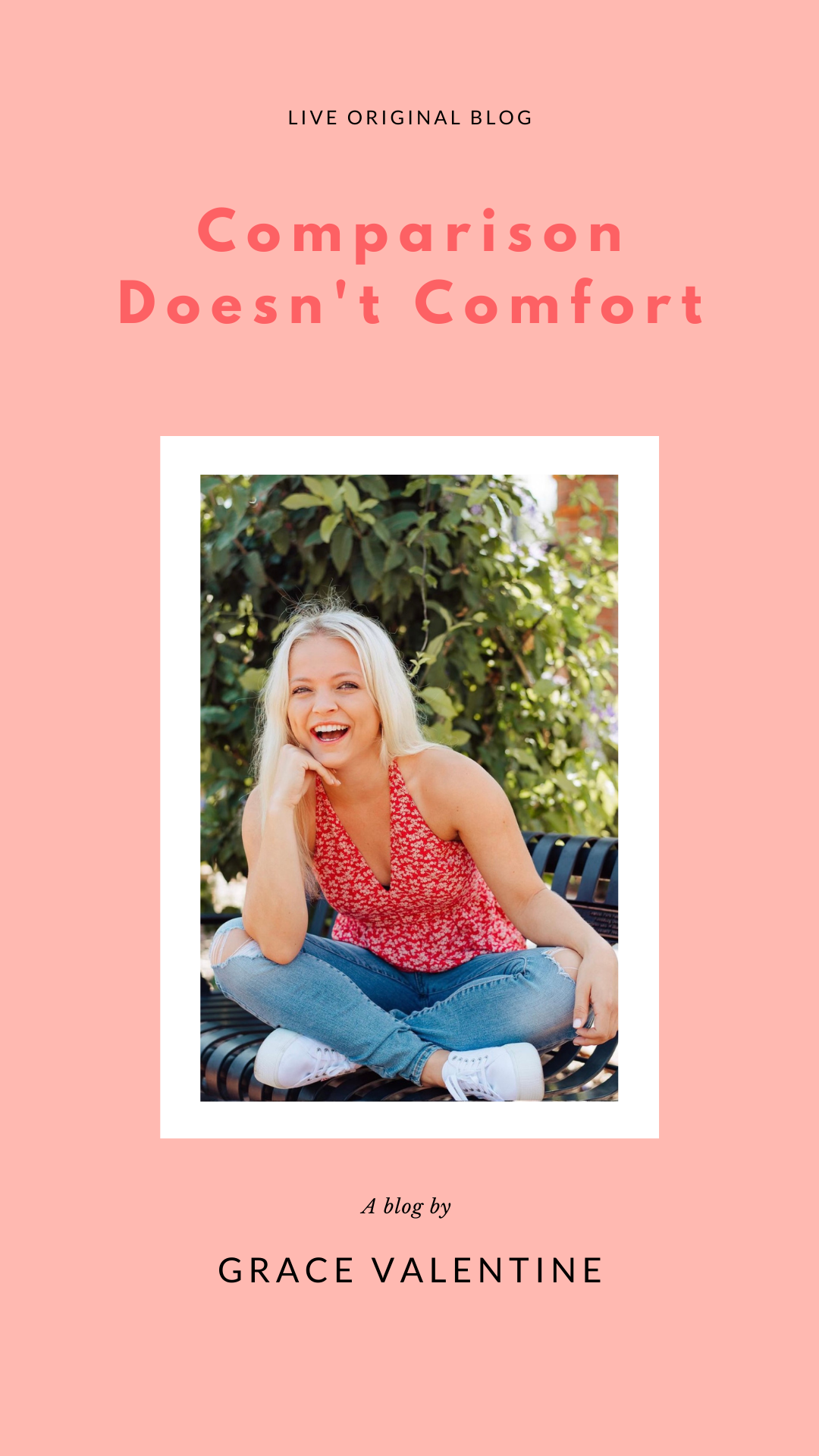 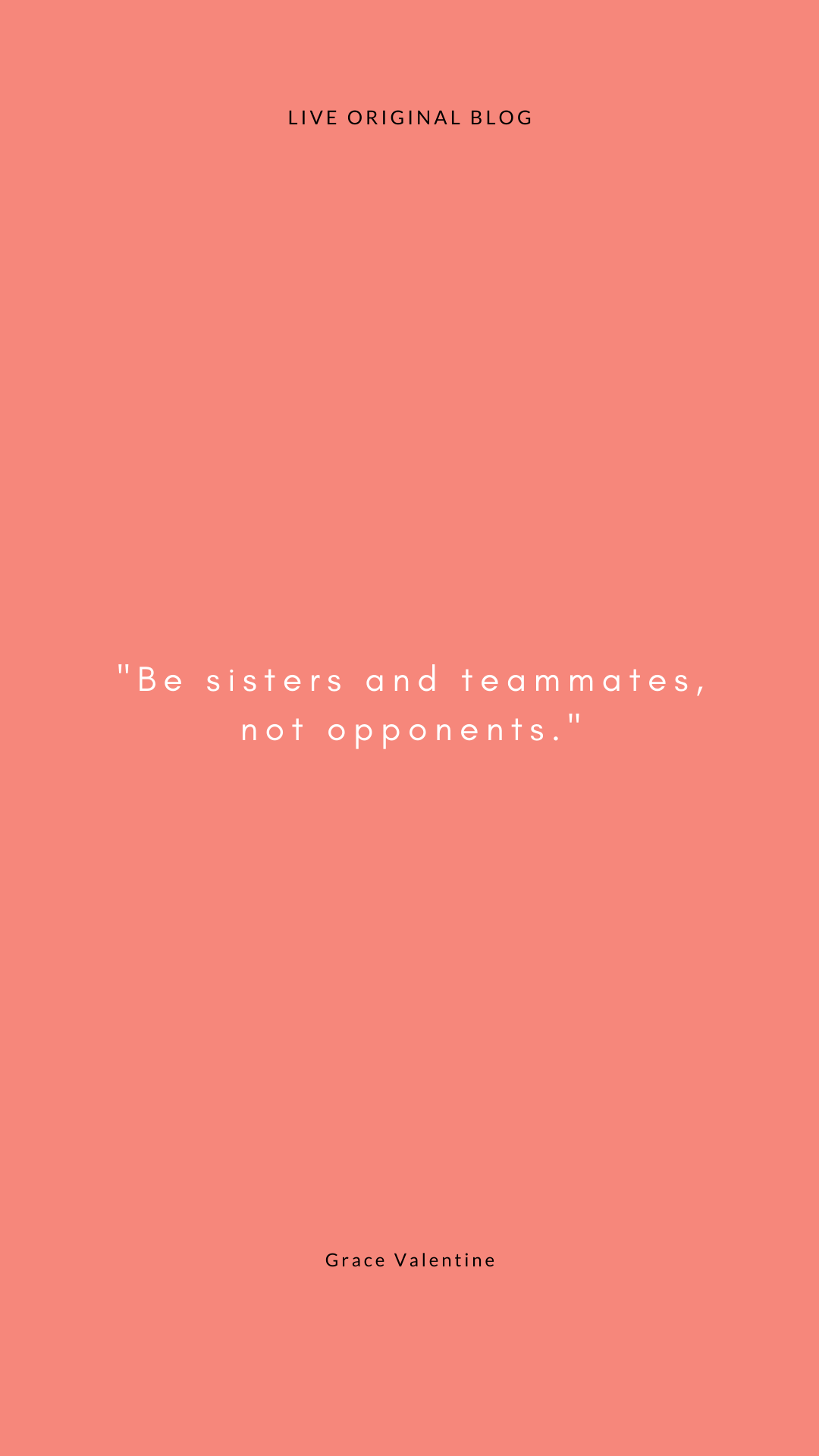 The truth is comparison isn’t comforting. Comparison may make you feel good for an hour while crying that your ex moved on, and having a friend chime in saying “she isn’t as pretty as you,” but the next day you’ll wake up and look in the mirror and doubt your friend’s words. You’ll notice your waistline increasing and freak because Sally Jane, who is now dating your ex, has a smaller waistline. You’ll realize you aren’t the prettiest princess, and yes, maybe the girl next to you does have better legs than you. Her chest is bigger and the girl your boyfriend cheated on you with does get more guys than you.  Comparison highlights someone’s best and worst qualities while allowing you to only highlight your worst. It may make you feel good for a second, but comparison doesn’t comfort. Comparison doesn’t bring you peace. Jesus does. His grace completes you. When you compare others to each other, you begin to see the worst in your self. If you speak destruction in others’ lives, you continually destruct your own.  Comparison only highlights insecurities more.  Because, truth be told, if I compared my looks to the fashion blogger on Instagram – she would probably win.  I can’t compete with her, because I was never meant to be her.

Our society already puts so much pressure on women to look a certain way and to act a certain way. Why do we as women, who firsthand know how hard it is to be a girl… still decide to put down other girls?  And the thing is, this kind of stuff doesn’t only happen in high school. We like to believe it only happens in high school… childish stalking, judging a girl by her social media, and comparing her to your best friend… but I’ve met plenty of 20-somethings, 30-somethings, and soccer moms who like to make life a competition.

Why are we women so darn competitive?

LIKE WHY DO I HAVE TO ALWAYS BE FASTER THAN THE 40 YEAR-OLD NEXT TO ME IN THE GYM.

There’s no way my quads will ever be as good as hers. Nothing wrong with that. But why do I care? Why don’t I focus on myself, instead of wasting energy trying to be someone I’m not? Why don’t I cheer her on? I should spend more time being her sister and stop trying to be her competition.

Maybe you sometimes feel the urge to compete with your ex’s new girlfriend or the girl who is dating the great guy. Or maybe you feel like your friend gets all the boys and since you don’t, she’s winning and she is prettier.  It sounds dumb, because it is dumb. But let me be clear – just because one girl is beautiful and talented does not mean you are not. Just because someone is scoring touchdowns does not mean you have to sit on the sidelines. Just because someone is happy, does not mean you are supposed to be sad.  Life was never meant to be a contest. Community is about connecting, not comparison.  Our one goal should be Christ. We should be pushed to know Him and not be pushed to be the prettiest girl in our group, to be more popular than his ex, or to be more successful than our “friend.” Our one goal should always be to know Christ and make Him known. When you know Christ, you pray for those around you to walk in their blessings and in His name.

In Acts 9 there’s a woman named Tabitha who Peter comes across while telling others that Jesus had risen from the dead. We don’t know much about Tabitha and maybe that’s why I admire her so much. We don’t know if she was the prettiest girl in the town, or if she had a successful business. We don’t know if she made the best breakfast or if she was popular. What we know is that she loved the overlooked. She made clothes for the widows and the poor. Tabitha loved others well. She was constantly looking for those others had forgotten and helping them. When she died, everyone was upset wearing the clothes she had made them. Peter rose her from the dead through Jesus’s name.

In a society that tells us we should strive to be the “main character”, I hope we can strive to be like Tabitha. She loved big, didn’t try to make her name big. She served others, not her own name. She wasn’t worried about being “prettier”, “better”, or “proving herself”… she was busy being a good sister to everyone. And when others thought she was dead, they remembered her for her love. Her love was what made her different. She loved her sisters well and her community was better for it.

We have enough women who focus on changing their relationship status and changing who they are to please society. We need more women willing to change the world.  Always remember ladies – just because another girl is beautiful does not mean you are not. She’s your sister, not your competition. Life and community was meant to be a celebration, not a competition. Run the race God called you to run, the One that leads to Heaven. AND STOP trying to compete with people who are supposed to be your teammates.

Grace is a 24 year old author of two books who also writes timely encouragement on Instagram. She lives in Orlando, FL, and her favorite food is sushi!