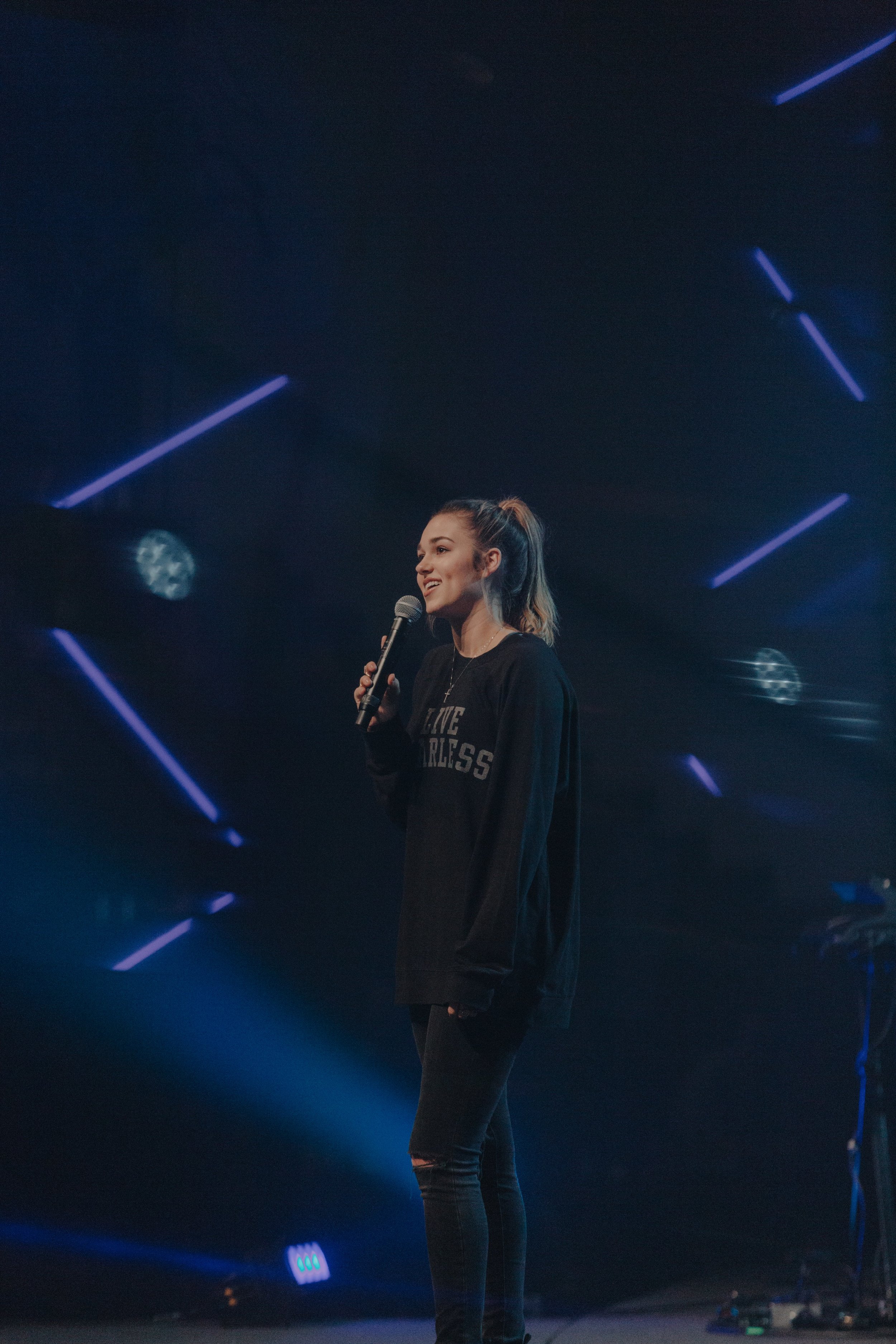 Do you believe there is more?

You need to know something before I start this message…the same power that raised Jesus from the dead lives inside of me…and can live inside of you. Okay, so if you didn’t quite catch that, let me just say it again…you can have the SAME POWER that was being cultivated inside of that tomb for 3 days inside of you. The Creator of the universe is waiting for you to rise up and BELIEVE that all things that are dead in your life WILL come to life by the same power of JESUS CHRIST. It is by that kind of faith that you will walk forward to pursuing your promises and fulfilling your purpose.

I want you to grab a pen, open your journal, grab a piece of paper, or write in the comments because you need to write to yourself today instead of just reading.

I want you to think about the current position you are placed in in life right now and who you are as a person.

I want to ask you a question. Do you believe there is more to your story then what you currently see?

Now read this message, and at the end, I will have more questions for you.

It is Good Friday. The day Jesus died on the cross. The day he took on sin and shame for the sake of all of mankind. It was a day that came after the mocking, the beating, the bruising and the pain, and the journey was close to the heart-wrenching end, he uttered the words, “My God, my God, why have you forsaken me?”

Wow…not a Good Friday. Actually, it probably seemed like the worst day in the whole world this Friday.

I heard Pastor Chris Durso preach on the seriousness of getting stuck in a “Friday mentality.” He highlighted a man in the Bible who got stuck with a Friday mentality. The man was Judas. Chris posed the question, “What if he would have just waited until Sunday? Then he would have known that actually Jesus was not defeated, in fact, DEATH was defeated. He would have known Jesus died to take HIS sin. He would have known life had only just begun, and there was so much more for him to do. Instead, he got fixed on a Friday, and he hung himself because he believed there was nothing more, and he was worth nothing else.”

You need to realize that when we get fixed on Friday, you come into agreement with death and defeat—but if you would just fix your eyes and focus on Sunday, you would step into the promises you have already been given, you would step towards fulfilling what you have been put on this earth to do, and you would be forgiven and delivered from the bonds of sin that hold you back.

Bob Goff told me once and has written in his new book, Everybody Always, that we need to wait to title our chapters. For example, that time in your life you once thought would be titled “Rejection” may later be “Release”. “Good Friday”, is a later chapter title. What once was defeat is now our victory, and that is why it is good. On that cross, where the mocking, the bruising, the pain, and the feeling of being forsaken happened, was actually where Jesus fulfilled his purpose on earth and the promises that had been given. On Good Friday, Jesus walked out what he had come to do. A day that looked like everything came to a close, was actually the start of eternity for you and me.

What if the very position you are in life right now, that you have believed would defeat you, is actually the spot where God is preparing you to fulfill the promises He has for you. Perhaps you have been so stuck on Friday, that you stopped moving towards Sunday. Do not let Friday steal your promises and swipe you from your purpose. Fix your eyes.

“Therefore, we do not lose heart. Though outwardly we are wasting away, yet inwardly we are being renewed day by day. For our light and momentary troubles are achieving for us an eternal glory that far outweighs them all. So, we FIX OUR EYES not on what is seen, but on what is unseen, since what is seen is temporary, but what is unseen is eternal.” 2 Corinthians 4:16-18

promises waiting for you

·       Purpose… do you believe you have it? If you do, you will stop comparing, stop feeling insecure, and get rid of the competition mindset even though everyone around you is doing amazing things. Move on from Friday.

·       Known by name… do you believe that? If you do, you would not allow yourself to believe you are invisible even though that is the way the world has made you feel. Move on from Friday.

·       More than a conqueror in Christ Jesus… do you believe that? If you do, you will stop accepting the lie of defeat you are being faced within your workspace, in your relationship, in yourself, or even in the timeline you created for yourself. Move on from Friday.

·       Strength and increase in power of the weak… do you believe that? Even though right now you have never felt so weak? KEEP MOVING.

·       a love that will not be shaken… do you believe that? Even though the world has not done a good job of showing you what a love that last looks like? KEEP MOVING.

·       A covenant of peace… do you believe that even though chaos is all around you and you’re in a stressful situation? KEEP MOVING

·       No weapon formed against you shall prevail … do you believe that even though you feel like you are getting exhausted fighting a battle? KEEP MOVING

·       You are the head and not the tail… do you believe that, even though you have never felt good enough? KEEP ON MOVING

Faith is your momentum, and in life and in faith you have to keep moving…

·       What if Moses’ mom didn’t put him in the basket to ensure his safety, and just accepted the fate the world had given their child?

·       What if Moses didn’t believe that by the power of God in His rod, the waters would part the sea so they never even tried to flee?

·       What if Joseph believed that the pit he was in when his brothers threw him in the well was the end and gave up on life?

·       What if Abraham and Sarah just believed they were way too old to have children and thought God’s promise was a lie?

·       What if Ananias was too afraid of whom Saul was and didn’t go lay his hands on him for his healing?

·       What if Saul believed he was too far away from redemption and allowed shame to stop him from becoming who he was called to be?

FAITH activates the fulfillment, and what I think is important to remember is God’s timeline is ETERNITY. That is the direction He is moving and is wanting to move in us. IT IS NEVER THE TIME TO GIVE UP. It is also important to remember when he uses one of us, he has all of us in mind. Your movement is creating the movement.

Read this from Hebrews 11…

“And what more shall I say? For TIME will fail me if I tell of Gideon, Barak, Samson, Jephthah, of David and Samuel and the prophets, 33 who BY FAITH [that is, with an enduring trust in God and His promises] subdued kingdoms, administered justice, obtained promised blessings, closed the mouths of lions, 34 extinguished the power of fire, escaped the edge of the sword, out of weakness were made strong, became mighty and unbeatable in battle, putting enemy forces to flight. 35 Women received back their dead by resurrection; and others were tortured, refusing to accept release so that they would be resurrected to a better life; 36 and others experienced the trial of mocking and scourging and even chains and imprisonment. 37 They were stoned, they were sawn in two, they were lured with tempting offers [to renounce their faith], they were put to death by the sword; they went about wrapped in the skins of sheep and goats, utterly destitute, oppressed, cruelly treated 38 wandering in deserts and mountains and [living in] caves and holes in the ground. 39 And all of these, though they gained [divine] approval through their faith, did not receive [the fulfillment of] what was promised, 40 because GOD HAD US IN MIND and had SOMETHING BETTER IN MIND FOR US, so that they [these men and women of authentic faith] would not be made perfect [that is, completed in Him] apart from us…”

THAT IS THE KIND OF LIFE I WANT TO LIVE. You may have to face a Friday, but you get to be a part of a Sunday. A day that a dead man walked again, the day Jesus rose from the grave, left his Spirit with us to lead and guide us, and is sitting at the right hand of the Father on behalf of us. I choose to believe He has something better in mind for me, and I do not want to miss out.

So here are my questions after all of that…

Do you believe there is more to your story then who you are right now? Do you believe that Jesus rose from the dead on that Sunday and can bring you from death to life? Do you believe that the very power that lives inside of Him can live inside of you? I want to ask you those and give you the opportunity to speak out what you truly believe. Fix your eyes. Write it down. Step into faith.