Waiting on a Word

Have you ever been reading your bible and felt super stumped on one story? Or certain words Jesus spoke? Sometimes it’s because the message feels unclear, but if I’m being honest, there are some stories that just straight up bother me. I’ve come to love these moments.

When we approach God’s Word, the tendency is for us to think that the message will be immediate. Why wouldn’t it be? If I’m making the effort to sit down with the Lord, wouldn’t He want to speak to me during this time? Yes, but perhaps we’re sitting down with the wrong mindset.

Our culture and time in history has a lot of perks that offer immediate satisfaction—that’s not all bad. Sometimes it’s really nice, like grabbing a salad or sandwich during a busy day without having to think about it or prepare for it. The Holy Spirit just doesn’t work like that, and He is the translator of God’s word in our lives. It isn’t that God wants to continue to dangle a carrot in front of us on a wild chase (though sometimes I’ll admit it can feel this way). The Lord wants us to wait on Him, because it is in the waiting we find value. In His word—in Him. The word of God never returns void.

It’s actually this waiting process or the initial feeling of being stumped on something in the Bible that makes me feel more seen and connected to the Word of God than even immediate understanding now. It used to feel as though when I didn’t understand something I didn’t know Him. As if I was further from Him than I thought. Now I get excited about stumbling on these passages, because it’s come to mean He wants me to specifically see something. When you’ve learned to dissect the text and wait on Him, you realize He’s preparing to speak to you.

Such was the story in Matthew 15 about the faith of a Canaanite woman. Wedged in between multiple accounts of Jesus’s miracles, healing, and feeding over 5,000 people, is a woman who had to wait. In fact, the first thing that really bothered me was she called out and was crying to Jesus over her daughter who was “severely demon oppressed,” and the bible says, “But he did not answer her a word.” What… But this doesn’t sound like Jesus to us. Why wouldn’t he answer her—especially in her distress?? Especially since it’s for her daughter and after all she is seeking Jesus!

When I start to feel this way as if I see discrepancies in God or Jesus’s character, I like to physically journal the line that bothers me most and then write what I know to be true both Him and of the situation. It might look like this:

“But he did not answer her a word.” 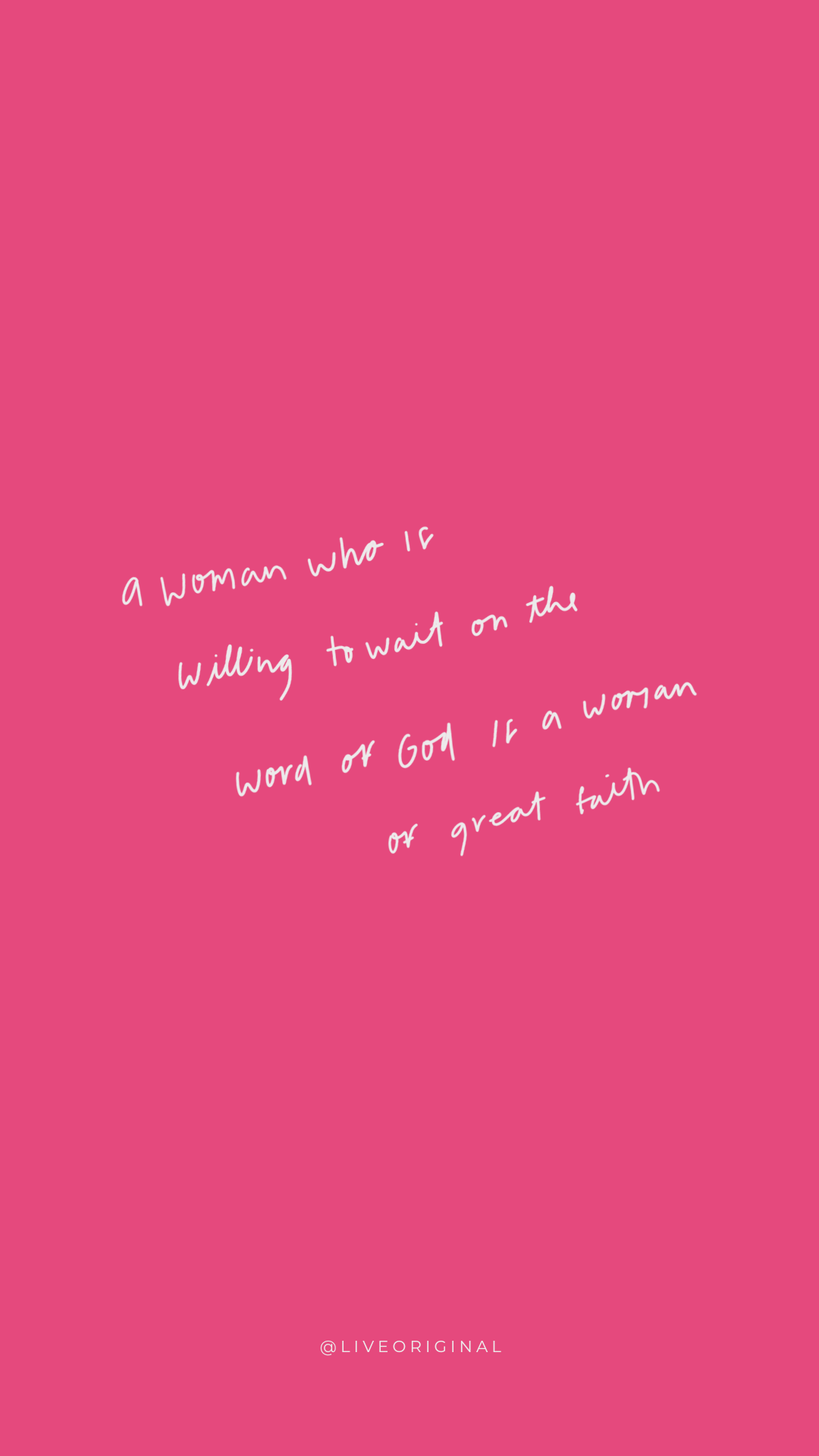 Now this still hasn’t given me answers. But it has given me something to cling to. I’m clinging to truth—to what I know to be true of the Lord. I’m still filing away “why” questions, but I’m moving on. Only then, it gets seemingly worse. After the disciples beg Jesus to send her away, He tells her he was only sent to the lost sheep of the house of Israel—to the Jews. In other words, not her, because she is a Canaanite. Then something changes in her.

After his response, she comes and kneels before Jesus saying, “Lord help me.” This story already feels like a different Jesus (emphasis on feels), but the next part really doesn’t sit well with us. He tells her, “It is not right to take the children’s bread and throw it to the dogs.” Ouch. Aware of all our own shortcomings and lack of Jewish heritage, we cringe with those words, because this could very well have been me. Yet she continues in her posture of humility that she began in her physical kneeling: “Yes, Lord, yet even the dogs eat the crumbs that fall from their master’s table.”

The implication we tend to pick up here and consequently the incongruence in Jesus’s character is: is he calling her a dog?? In short, no… and also yes. To properly answer this question, we must understand the difference between children and dogs. And yes, I’m sorry to tell some of you—there is a difference. For one, children know where their bread comes from. Two, they can appreciate (and not appreciate) the difference between different kinds of bread.

My dog Jazz recently ate an entire loaf of my mother-in-law’s homemade sourdough with garlic and rosemary. Jazz got it off the counter, opened the bag, and ate the entire loaf with absolutely no qualms whatsoever. She didn’t know where it came from and she has zero appreciation for homemade sourdough, fresh pressed garlic, or home-grown rosemary. She was just hungry, so she ate it. She would have eaten a squirrel with just as much fervor. The reason it’s cruel to take the bread from the children and throw it to the dogs is because the children know what they’ve lost and the dog knows not what he’s gained.

Though we’ve established this woman was Canaanite and not Jewish, we need to dig a little deeper. Canaanites as a general rule were polytheistic. They served many gods appealing to them in many capacities depending on their needs in that moment. Struggling to get well? Appeal to this god. Struggling to have a baby? Call upon that god. Demon oppressed daughter? I’ve heard Jesus can work miracles. You see the logic?

It wasn’t that Jesus was calling this woman a dog. It was that He was calling her out from her dog-like spiritual mentality—always seeking the crumbs that would satisfy the moment, but never caring to find the source for the Bread of Life. Suddenly, making her wait makes much more sense, doesn’t it? Because had He answered her first plea and healed her daughter, He perhaps would have sent this woman and her household back into a life of pagan rituals never realizing they just walked away from the only One who could save their souls.

Remember our truths about Jesus? He wasn’t leaving. He was listening. He did have compassion, and He did want what’s best for her. But her waiting moved her from seeing Him as “Son of David,” among a whole list of gods, to the Master of the table. A place her heart now longed to belong to even if it meant being a dog at the master’s table. She’s no longer serving her own needs to move on, she wants to remain at the table in whatever capacity she is permitted. And look at Jesus’s response. “’O woman, great is your faith! Be it done for you as you desire.’ And her daughter was healed instantly.”

Isn’t it amazing that when she kneels before Him, a reflection of the posture of her heart, acknowledging Him not just as a lord but as THE Lord, and humbles herself, He praises her? She was the one choosing the begging life of a dog; He was setting a place for her at the table as a child. Then He answers her first request, and the healing happened “instantly.”

I’m not saying this is what everyone’s story looks like, but I do think there’s a commonality in her waiting and our waiting. Jesus wasn’t unwilling to heal her daughter—He just wanted this woman to find true healing for her own heart. The kind that would be long-lasting. Eternal. He didn’t want her to continue through life settling for crumbs—He wanted her to have the Bread of Life so that she may have life abundantly. Through her persevering and waiting on the Lord, He wanted to give her immeasurably more than what she was asking for.

You know, we can be a lot like this woman in terms of our faith and the way we seek Him. Though we may not appeal to many gods, we do seek many avenues for answers, wisdom, and comfort. Sometimes I think we even approach His word satisfied to get just some crumbs to sustain us. Sometimes we grow frustrated, sitting on a passage or a verse feeling like our time with Him has grown stale. It hasn’t. He’s listening. He’s not leaving. He just wants immeasurably more for you than what you’re asking. Maybe it’s time to change your heart posture. Maybe it’s time to just sit in the dissonance of not knowing the answers until He brings them so clearly, you know He sees and loves you. Because He does. The truth is, a woman who is willing to wait on the word of God is a woman of great faith just like the Canaanite woman.

Hey friends! What to tell you? (I’m never good at this)! I am married to my high school sweetheart Andrew. We just celebrated our 11-year anniversary, and we have 3 kids—Bear, Garnet, and Finn. They are the best! I am primarily a stay-at-home mom, but I am also currently working on the edits of my very first book, which has been a little over 2 years in the making. If my writing career fails, I plan to wholeheartedly pursue a career as a backup dancer and/or standup comedian. JUST kidding—while I wish I had something super fun to tell you, I’m just a girl who loves the Lord, her family, and her friends who is bringing whatever she can to the table to serve the kingdom one day at a time.