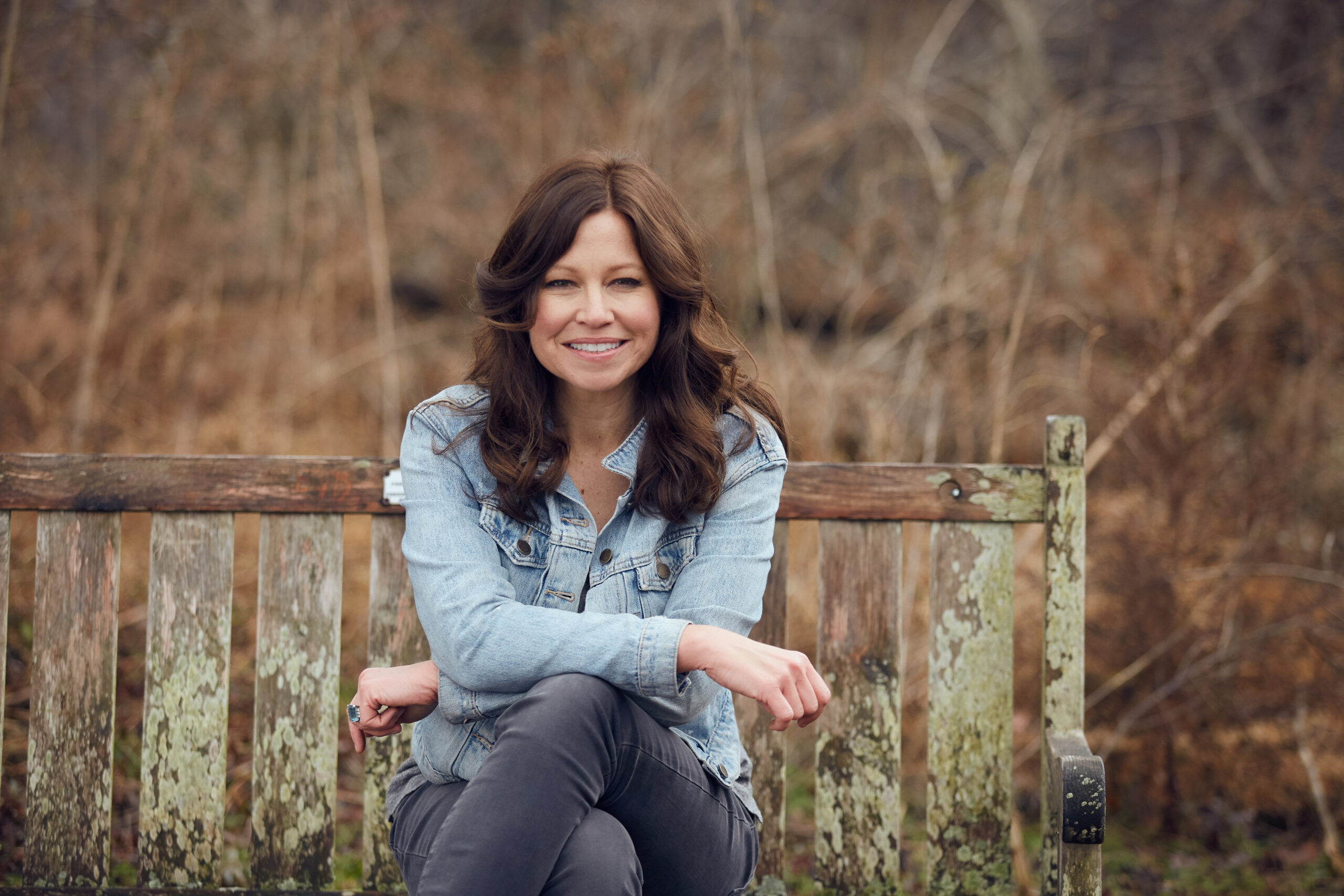 God’s Faithfulness in Our Disillusion

God’s faithfulness isn’t based on my current set of circumstances. At least, I know this intellectually. His inherent goodness doesn’t ebb and flow along the shoreline of how well my life is going, or not. But I sure do feel better about Him when spring is in the air, my relationships are thriving, and I have reservations at Margot’s (the coziest restaurant in town). When life is sure-footed and happy, I suppose it’s easier to get behind the idea that God is good. But what about when life goes the other way and the disappointments keep crashing as surely as waves hurl themselves onto the shore? When you’ve just scraped the sand out of your bathing suit and another crest douses you from behind and down you go again? What is God like then? Is He faithful and good in all circumstances? And if so, what are we to make of that seemingly dichotomous pairing: the pain of life and the faithfulness of God? The book of Ruth may not give us a simple answer, but it offers an undeniable narrative of our Redeemer.

When I was twenty-five, I moved from my home of northern Virginia to Nashville, Tennessee. My gunmetal-gray Jeep Cherokee puffed and fumed down I-81 South, stuffed with clothes, a few small pieces from my parents’ house (where I’d been living), my guitar, and dreams hanging out of every window. I’d slid my whole life’s worth of chips into the middle of the table, except nothing about that move felt like gambling. Rather, I was going all-in on my one dream: becoming a singer-songwriter. I had big plans to be wildly successful, all for the glory of God, of course. A few years later, my business manager neatly described things when she leaned toward me over a restaurant table, folded her hands, and said, “I’ve never seen anything not work this much.” And just like that, my music career and the better part of my twenties were captured in a sentence.

She wasn’t mistaken. I felt everything go dismally wrong to the specificity of a crossed t and dotted i. It was as if God Himself was thwarting my path. From the very beginning, people who signed me to record deals lost their jobs shortly thereafter, the companies I signed with got sold or went under, merchandise was shipped to the wrong warehouse before a major tour, and nearly every sure thing turned into “Well, we’ve never had anything like this happen before.” Every break seemed to be a bad one instead of a big one. Eventually I found myself years down the road with three failed record deals, living alone, squeezed financially, and not a thing to show for my efforts—except a spectacular plaque from a short-lived number-one hit on Christian radio. I was anxious. Purpose eluded me as much as the dreams I was seeking. All the while, I wondered why God seemingly tricked me into coming to Nashville. I thought I was following Him, albeit my priorities were a tad out of whack.

While I may not have used such piercing language, I identified with the words of Ruth’s mother-in-law, Naomi: “The LORD’s hand has turned against me!”(Ruth 1:13). Without in any way setting my non tragic disappointments next to Naomi’s loss of a husband and two sons or Ruth’s loss of a husband, I identified with Naomi’s conclusions about God’s relationship to her life. I hadn’t felt God’s wind at my back for quite some time; rather, He felt more like a blustering gust into which my path always seemed to be headed. I suppose I didn’t recognize at the time that even this was a sign of His presence. During those days (and since), the book of Ruth became a well-worn park bench where I could sit beside old friends who, despite the blowing uncertainty around them, found God to be nothing less than wholly faithful. But this took time, of course, for all of us. The book of Ruth is one of the most compelling redemption stories in Scripture, and perhaps of all time—at least in my humble opinion. Like most good stories, it begins with complications and even tragedy in desperate need of restoration. Famine plagued Bethlehem, most likely due to the Israelites’ collective waywardness toward God. So an Israelite family off our—Elimelek; his wife, Naomi; and their two sons, Mahlon and Kilion—left God’s chosen town for the distant pagan land of Moab. Rather than stay and suffer for a season with the people of God, the family chose to flee the place of His presence for fuller bread baskets. The problem was that to dwell in Moab was to dwell with a people whose hearts were far from Israel’s God. 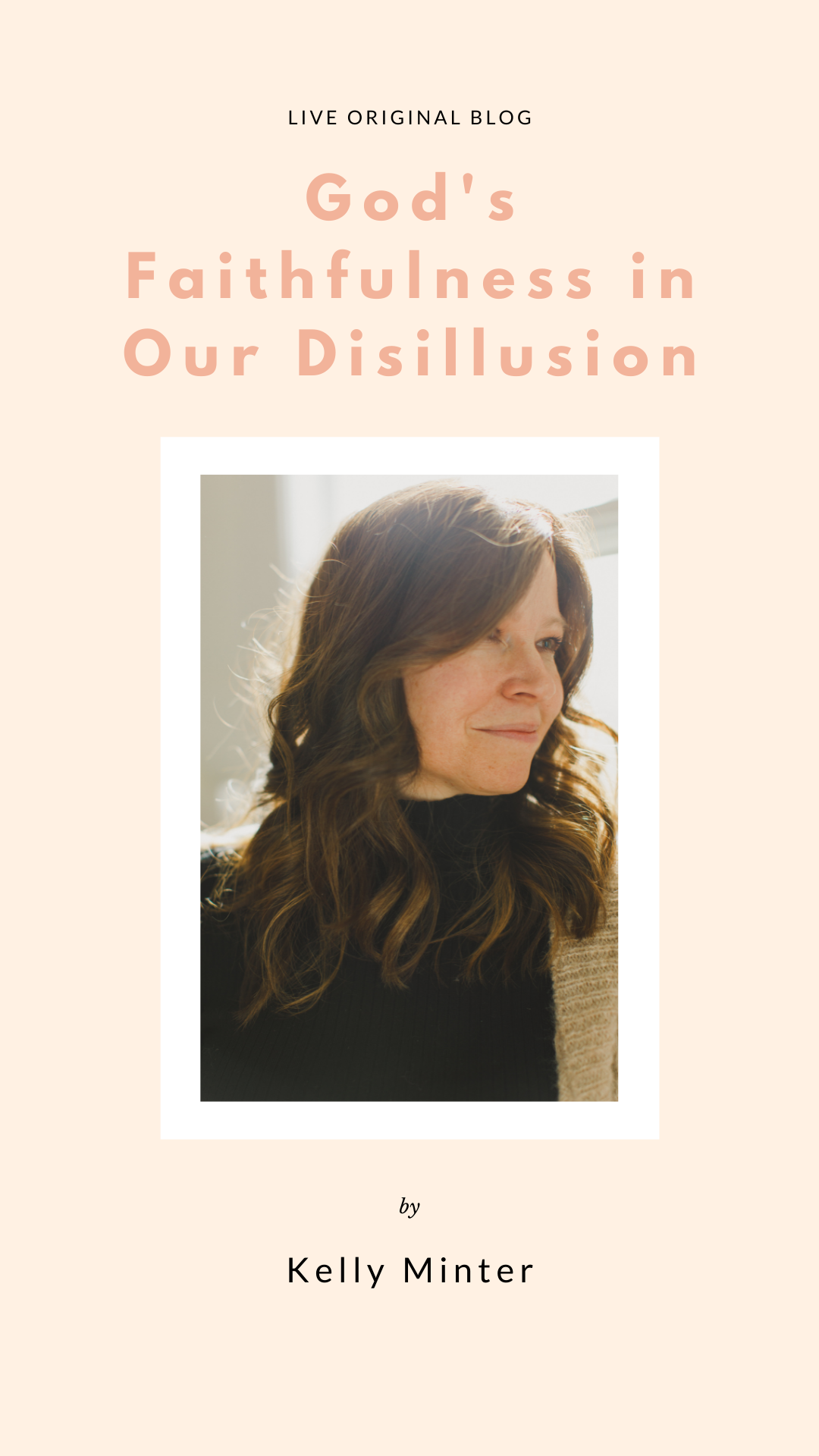 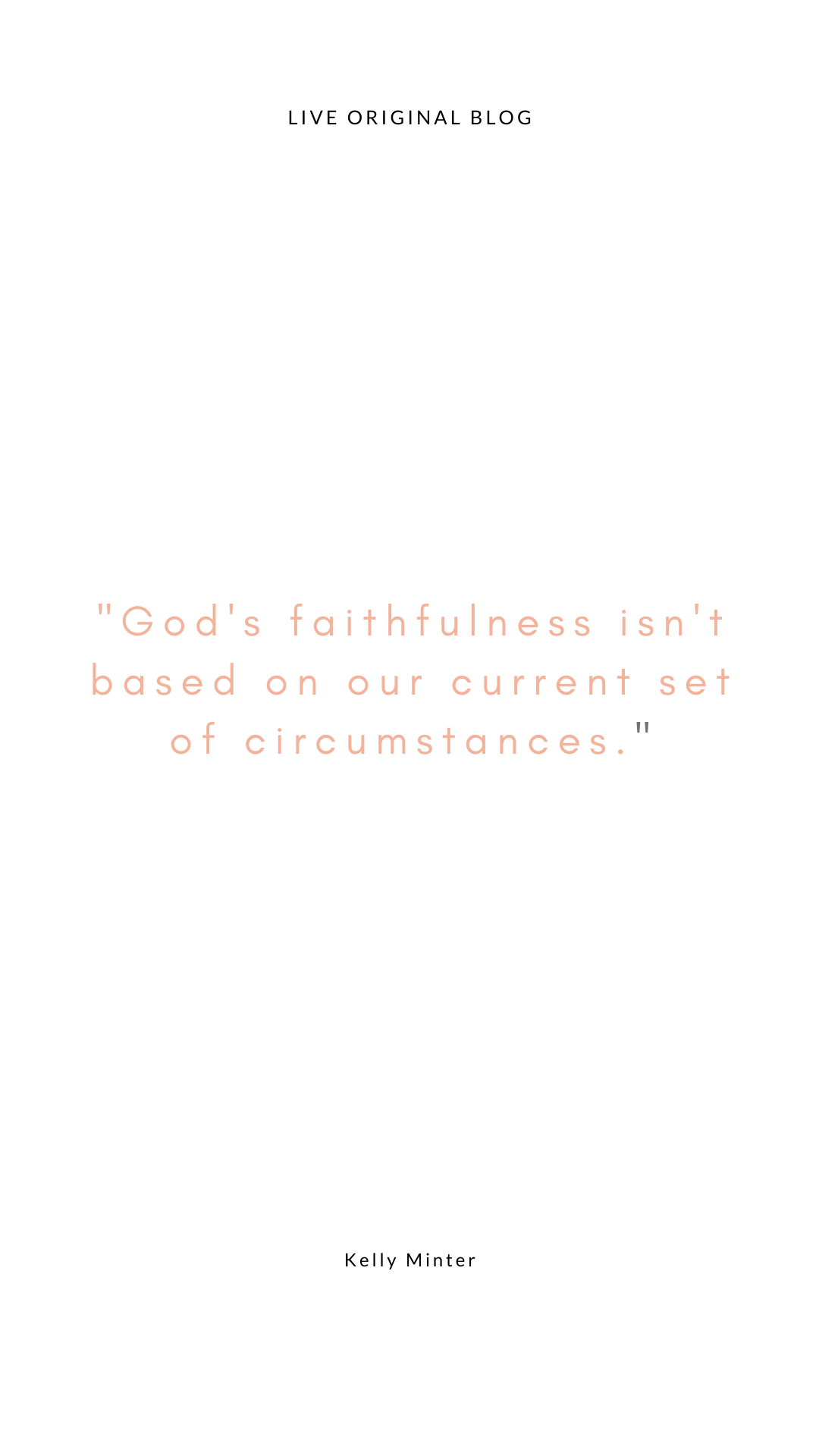 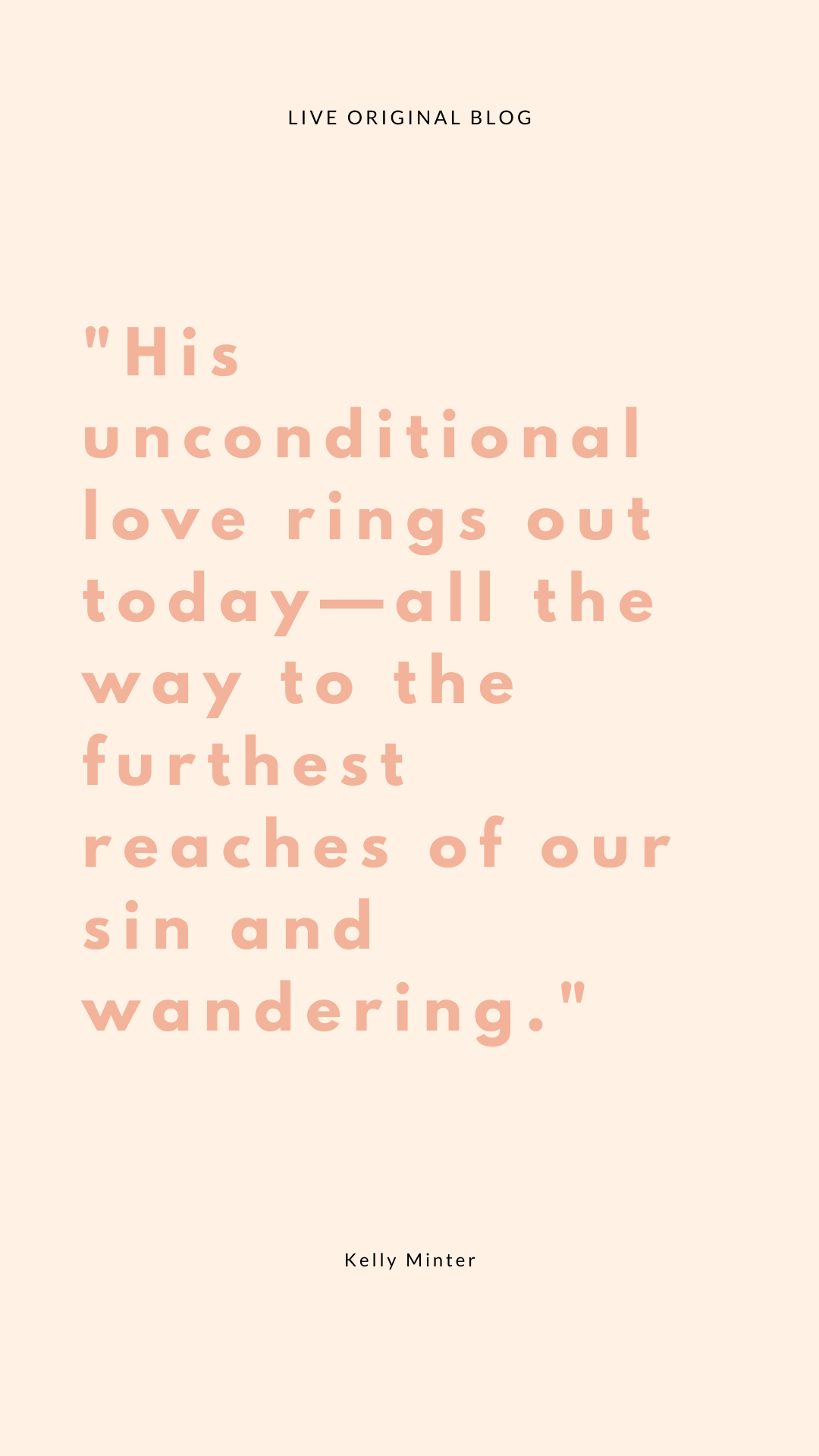 Sometime after the family’s relocation to Moab, Elimelek died. In an ultimate blow to Naomi’s heart and future well-being, both her sons died as well, sometime after marrying Ruth and Orpah. In Israelite society, a woman’s significance and sustenance were wrapped up in the life of her husband, who provided, and her sons, who carried on the family name and legacy. So here our drama begins with Naomi, a childless widow with two foreign daughters-in-law (Ruth and Orpah), who are now also widowed. Three grieving women take center stage, one with rich Israelite heritage, and two with Moabite blood running through their veins. Despite Moab being a land at odds with Israel and Naomi having fled Bethlehem, neither was beyond God’s hesed. But we’ll get to that word in a moment.

It’s funny the things we can still hear from and about God when we’re in far-off places. I wouldn’t have expected Naomi to be able to hear anything about Israel’s God since she and her husband made their beds far away in the land of false gods. I would have assumed God’s grace and provision were only for the people who stayed in Bethlehem and endured the famine. In other words, the people who “earned” it. Additionally, when we stray from the sheep pen, how far can the Shepherd’s voice be expected to travel? Well, apparently it can reach all the way to a place like Moab:

When Naomi heard in Moab that the LORD had come to the aid of his people by providing food for them, she and her daughters-in-law prepared to return home from there. (Ruth 1:6)

When the peals of God’s grace rang out in Moab, the echoes of invitation extended all the way to Naomi and her Moabitess daughters-in-law. Naomi prayed that Yahweh, the God of Israel, would show faithful love or “kindness” to Ruth and Orpah as He had shown it to her (see v. 8). The Hebrew word for this selfless and unconditional love is hesed, and it’s based on covenant—not on one’s ability to earn it. Scholar Daniel I. Block speaks of it this way: “Israel associated it with Yahweh’s covenant relationship with her; that is, despite her waywardness, Yahweh always stood steadfastly by Israel in ‘covenant loyalty’.”¹

We may be tempted to think that such an Old Testament term is meant for Old Testament times. But in fact, the hesed of God culminates in the person of Jesus. His unconditional love rings out today—all the way to the furthest reaches of our sin and wandering. And when such an invitation reaches our hearts, we should do as Naomi and her daughters-in-law did: start the journey home.

Somewhere along that formidable trek, Orpah decided to turn back, but Ruth clung to Naomi. Right before their parting, the narrator describes the three of them weeping together loudly (v. 14). While we all weep in this life, the direction in which we weep makes all the difference. Orpah wept backward to the familiar, her pagan gods, and away from the one true God of Israel. But Ruth and Naomi wept forward. This scene particularly moves me as a reminder to keep my feet pointed toward the Lord even when what He’s asking of me brings immeasurable tears. My obedience to Him as a single woman, as a disciple, has often been costly. When I reflect on Jesus’ commands in Scripture—the high call of loving others, forgiving, letting go of bitterness, putting on compassion, kindness, humility, and dying to my selfish desires and ambitions…well, it’s a radical way of life. At the same time, it’s borne fruit I never would have tasted had I clung to what I thought I needed for life and happiness over what He revealed I needed from His Word.

My own path has been far from linear, but I’ve discovered that a nonlinear path often results in linear sanctification. In other words, when I can’t make sense of what God is doing and I’m zigzagging in directions I don’t fully understand, my path to Christ becomes surprisingly straight. Anything I’ve suffered in my life has drawn me closer to Him if I’ve allowed it to. And I’ve discovered that being transformed into the image of Christ is infinitely more valuable than the personal achievements I accomplish along the way (2 Cor. 3:18).

Dearest Jesus, my Kinsman-Redeemer, thank You that I can take refuge under Your wings. I am here not because of my heritage, status, or righteousness but because Your sacrifice and love have made a place for me. Though I am grieving loss, or disappointed that my life hasn’t turned out like I thought it would, or disillusioned by Your hand seeming as though it is against me—I choose to trust You. I confess that You are good, faithful, and true in every conceivable way. I surrender all I hold dear to Your keeping. Though I may weep, I will weep forward by Your side. For You are my Redeemer, the one who restores and who works all things out for the good of those who love You. Hide me under the safety and shelter of Your wings, for in You I take refuge. Amen.

This excerpt featured is from her chapter in the Faithful book. Christian artist, author, and speaker. Books: ​The Fitting Room, No Other Gods, A Place at the Table, Wherever the River Runs​ and many more that include numerous popular Bible studies. She wrote the chapter on Ruth in the Faithful book, available now. She is also a songwriter/guest on the Faithful: Go And Speak album out now.