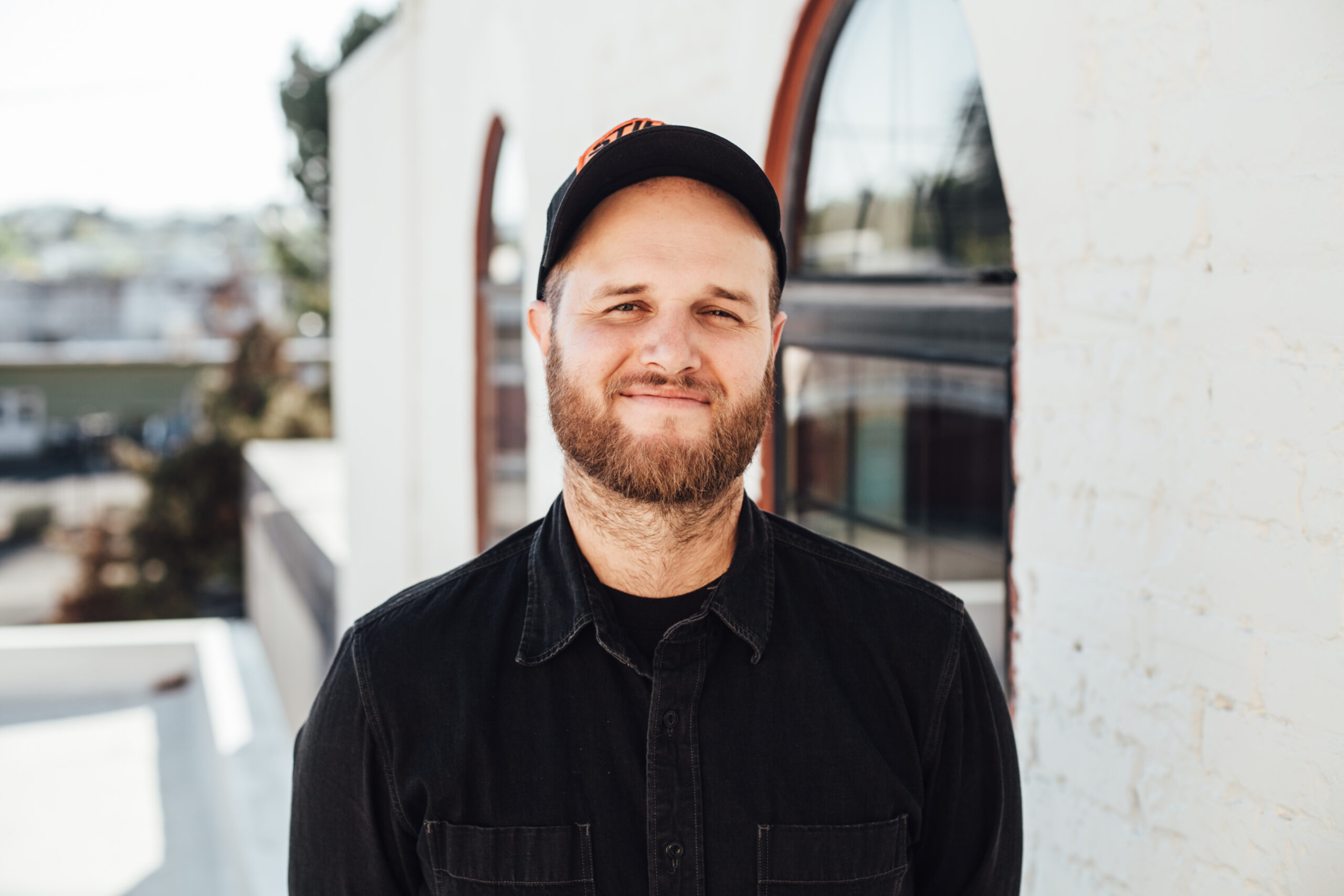 I wonder sometimes if my family’s end of dinner negotiations make The Art of War seem like Goodnight Moon. There is a wide range of rituals I use to accentuate my own persuasiveness. My adversary requires every weapon in my arsenal. It’s my five-year-old daughter and she is convinced she has finished her dinner. Before fatherhood I hadn’t noticed the gestures I rely upon in such situations. The nod of my head to indicate my initial open-mindedness during the little lady’s opening arguments. My eyebrows waving up and down like rollercoaster rails in both shock and intrigue concerning what she considers her strongest points. I use a certain high pitched inflection in my voice as I point out flaws in the logic, and a shrug of the shoulders relays my hesitation with her strongly asserted conclusions. I lived ignorant of the frequency and details of these conventions for quite a long time. Those days are no more. In virtually every interaction between my daughter and I she mirrors and imitates the same sort of mannerisms and tactics directly back at me.

As it is for most other five-year-olds, imitating is my daughter’s way of life. She has a closet bursting with replica princess dresses from her grandma. If one of these floor-length ensembles is not weather appropriate she’ll sport the underpants-only look. Each one plastered with My Little Pony, Paw Patrol, Minnie Mouse, Dora or more princesses. Her favorite anything is a Frozen something. She has Elsa boots, Elsa galoshes, Elsa nail polish, Elsa pillows, Elsa blankets, Elsa nightgowns, Elsa coloring books, an Elsa purse, Elsa dolls, Elsa dresses, an Elsa toothbrush, an Elsa water bottle and a child-size Elsa make-up vanity. Admittedly, the make-up vanity is pretty cool if you’re small enough to fit on the white fluffy stool.

She imitates and copycats at a deeper level, too. She carries on conversations in vocabulary she doesn’t understand using words she has heard only once before. She protests and objects with arguments I know she’s recycling from a TV show she just watched. Her syntax and body language are an obvious mix of both her mother and I. Her existence is a combination of attributes pirated moments before her use. Her life is a strung-together assortment of things she has collected and repurposed from the lives of others. 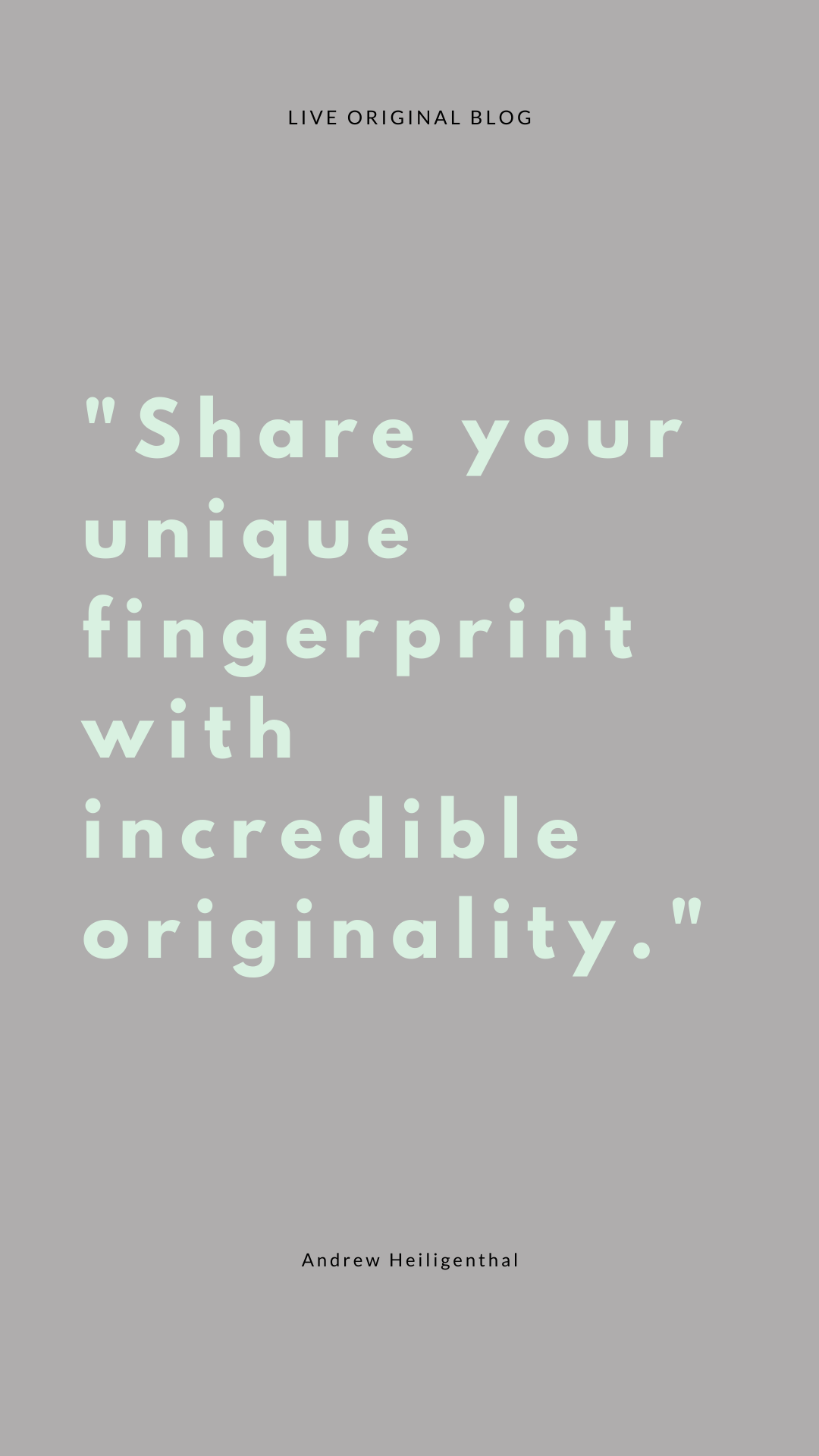 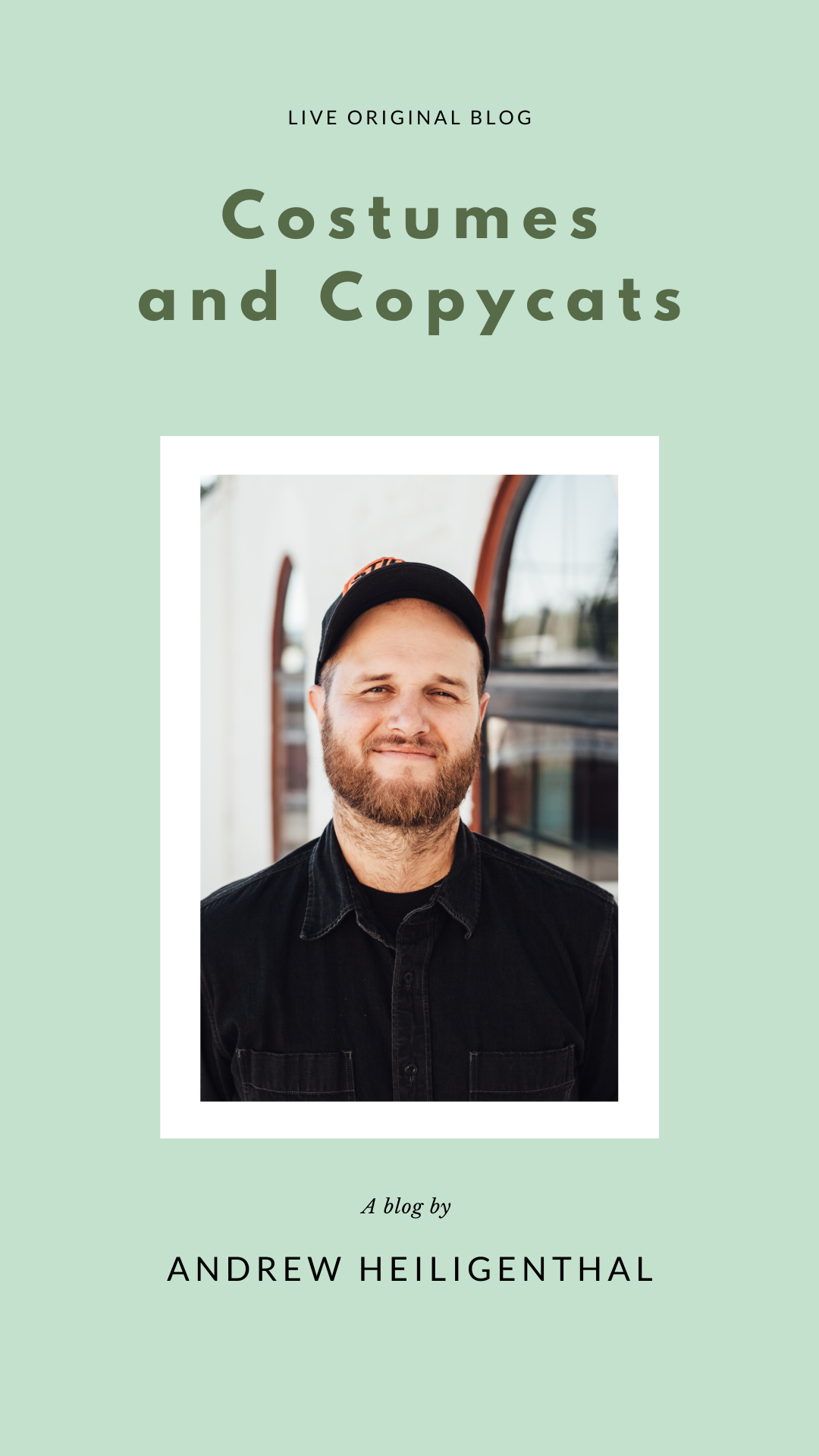 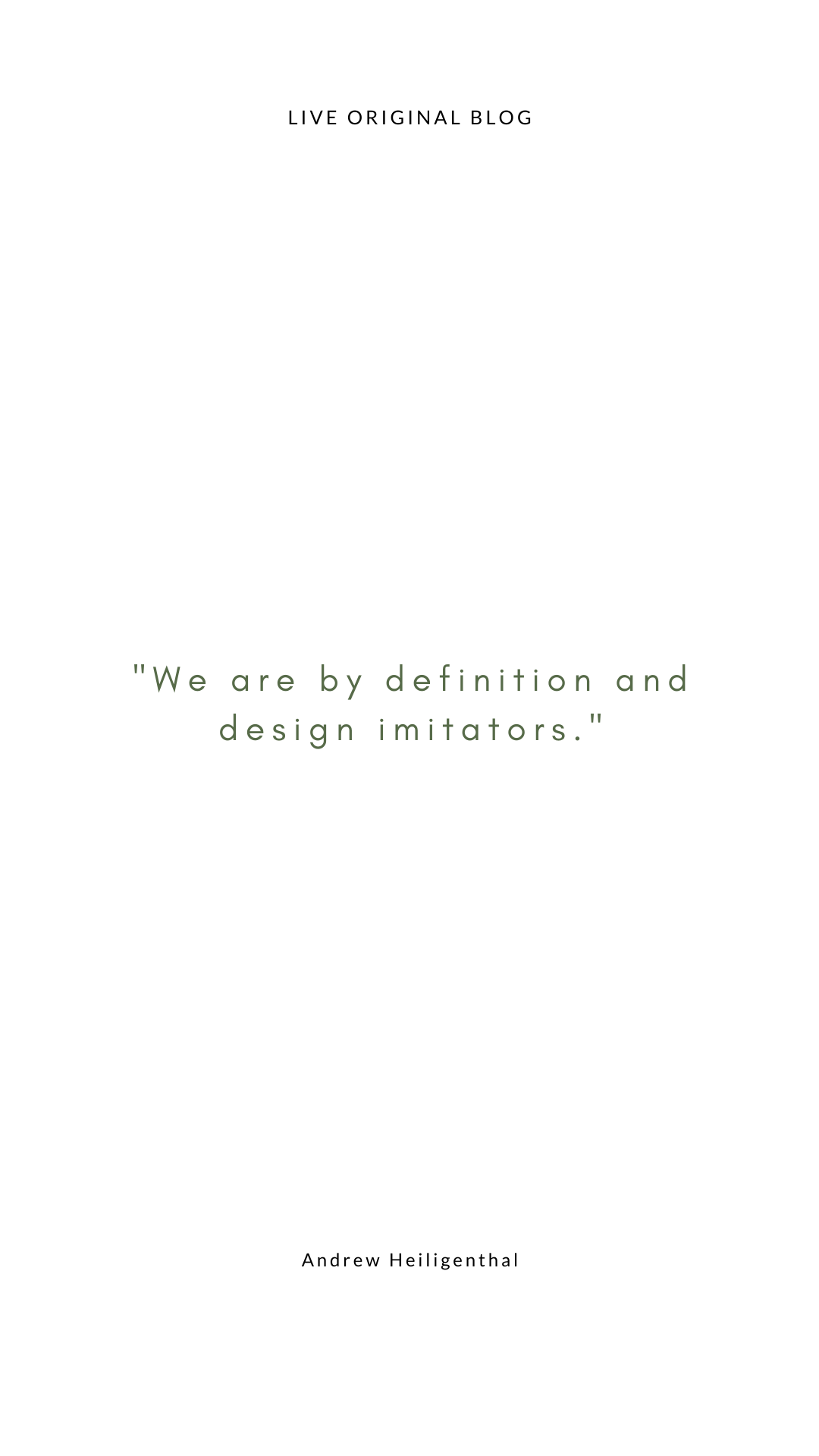 It is fascinating to me, however, that one who costumes and copycats each moment of every day remains so completely herself. How can someone such a product of repetition remain so genuine? How can one so blatantly a copycat be so original? How does such self-authenticating wholeheartedness arise from borrowing and reformulating another’s work?

It’s as if somehow since my own five-year-old days, I forgot something she knows intuitively. Of course when it’s my child being a copycat the unintentional impersonations are cute and completely endearing. But if I become aware of my own mimicry of another, I instinctively assess myself to be redundant and encroaching. A voice inside suggests adults best leave childish imitating ways behind. If what I share is to be truly me, the thinking insists, it ought not be something that is either in whole or in part an imitation or repeat. I strive to seize my unique and individual contribution in life and work and family. Originality eludes me like a light switch in a dark room. I’m fumbling around with my hands groping the empty air. Asking for a hint or light from someone else seems to be a violation. Imitating as my daughter can’t be a valid route for me.

It reminds me of the varsity football coach at my high school. Mostly because he happened to be my tenth grade history teacher. Also because he was a Medieval art connoisseur. We inspected hundreds of European masterpieces through the little panels of his carousel slide projector. I often wondered why so many great painters spent so much time generating their own version of a few well known and often painted and repainted compositions. Example after example of Adam and Eve in the garden or the virgin Mary with child. Raphael, as one notable example, allegedly painted over sixteen versions of the Holy Mother during only a four year period.

These master painters often rearranged and remixed. They recycled stories, symbols, colors, shapes, sizes and textures time and time again. Many followed the path of a mimic just like my princess-tote-totting daughter. While the obvious copycatting takes place on the outside, the authentic, ingenious and imaginative goings-on all occur invisibly. It’s mind and capacities and thoughts and emotions. A will and desire and mission and intentions. Each one firing off and working collaboratively constructing something sui generis amidst all this copying. This is the real location of what’s hers and what’s one of a kind. It’s something beyond just a body or a brain, beyond mere psychology or chemistry. It’s where she alone can create and cultivate and play. Where she hopes and dreams and loves each in her own way. It’s in the paradox of imitating that she not only finds and recognizes the gift inside her life, but begins to share the unique fingerprint with incredible originality.

What if the same is true of you and me? We too each exist and create in this same unseen place after all. Congratulations, we’re sitting here being crazy recreating, copycat selves every second of every moment. I just did it. You just did it. We just did it again. We can’t not do it. Imitation is more than just flattery. We love and therefore create in the way of the ones we hold so dear. We are by definition and design imitators. Originality is not an on/off switch like I might have imagined and I wouldn’t find it left up to my own devices even if it was. It’s more like a prism reflecting and refracting pure light into a whole range of color passing through. It’s something suspended in and surrounded by the brightest blazing sun that already fills one’s field of view.

That little girly bean is prone to mimicry, but it’s endearing and not uncreative. While most everything she wears, buys, draws and acts out is a representation of some other pre-existing character, persona or kind it is prolific and not forgery. It is beautiful, not redundant. She copies in a way that genuinely generates and coordinates those unseen attributes. When my daughter copies, she is doing more than simply trying on a dress or putting on a new turn of phrase. She sees in another what she is given to love. She is searching and hunting and cultivating—and ultimately reconstructing—in and through her being. She is finding out and then setting forth a loved and treasured thing.

My daughter grabs hold of what she loves through all this imitation. She tries it all on through me and her mother. She does the same through Elsa and Anna and through Mickey and Minnie Mouse. Through hundreds of crayon drawings, myriad books and countless pairs of princess high heels. This is actually all she really ever does. The same is true of me: I’ll never outgrow being a child imitating a father or mother. It is by imitating that I too find and share the love that has been put inside me. Perhaps to live and do and be brave is to embrace the way of my dad-t-shirt-tied-in-a-knot loving daughter. Perhaps what’s true for my child is true well beyond our childhood years.

Andrew Heiligenthal is writer, teacher and life coach living in Northern California. He is a certified life coach and has a Masters from A. W. Tozer Theological Seminary in Redding, CA. He is passionate about the way powerful ideas shape and transform people and the world at large. He is a husband, stay-at-home dad, goldendoodle pet-parent and holds a deep nostalgia for late 90’s alternative rock music. You can connect with Andrew on Instagram at @apheiligenthal and stay updated on writing and life coaching developments online here.