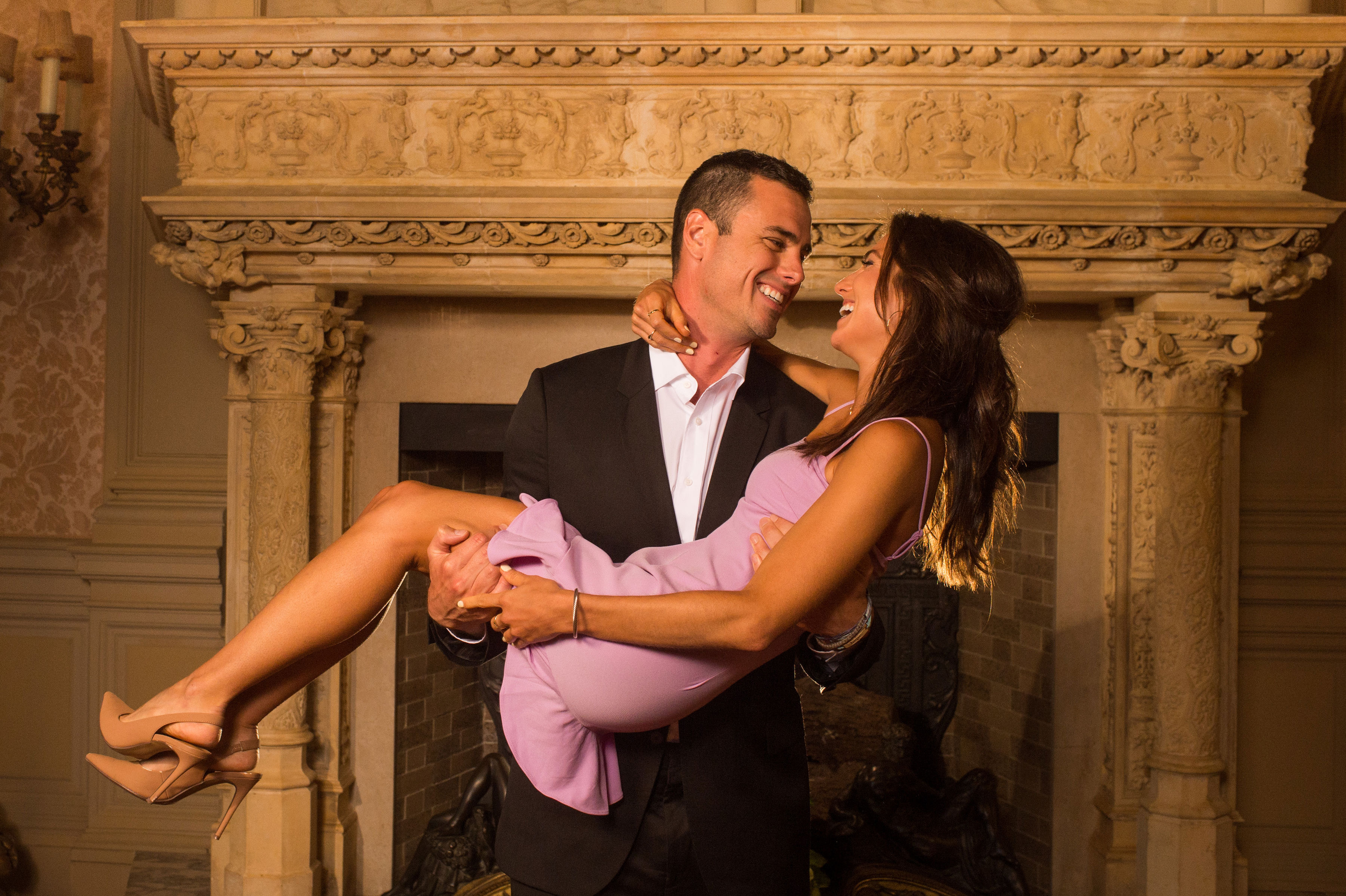 You probably know them as one of the greatest, most lovable couples out there right now, but what you might not know are all of the details that make them so great. We sat down with former Bachelor, Ben Higgins and his rockstar girlfriend, Jessica Clarke, to cover all the fun topics – like how they met, their favorite things about each other, and how they keep faith in the center of it all. We hope you LOVE this post from this precious couple!

How did y’all meet?

Jess was working a full time job in Nashville and Ben was staying in a hotel by Bridgestone Arena. There was a hockey game that night and he wanted to know what teams were playing so he looked it up on Instagram. Jess was at the game and posted a photo with her dad and tagged their location (always tag your location, ladies!). Ben saw the photo and took a screenshot then waited a few months until he messaged her on Thanksgiving. When she saw his message, Jessica was curious why someone with such a large following sent her a DM. She responded and we’ve talked every day since.

What quality did you first notice in each other?

Ben – “An ability and a desire to empathize in all situations, a kindness and consideration really wanting me to be my best. Also, a joy in all circumstances.”

Jess – “A selflessness that I’ve never seen in anyone. He leads those around him well, always putting their needs and considerations above his own. I saw that right away, and the more I get to know him, the more I see it’s true.”

How did y’all start dating? Who DTR’d first? (HAHA)

We had planned on having our first date in Nashville when Ben would be out here for work. Buuuut about 3 weeks into talking, we couldn’t wait to meet, so  Jess flew to Denver and as soon as we saw each other we mutually decided Jess would be Ben’s girlfriend. (and Ben would be Jess’s boyfriend)

When did y’all start talking about faith? How important is that aspect of your relationship?

Right away! We had been texting for about 2 days and then it was a Sunday. Ben was having questions about his church service that day and we had gotten into a deeper discussion than you would normally have with someone you’ve never met. He asked Jess a challenging question about generosity and giving. Rather than having her answer be misinterpreted, she sent him a voice memo. He called her right after and it was our first phone conversation.

Faith is foundational. Our relationship wouldn’t work or make sense without our faith being front and center. It’s a grounding force for us and something that has led to the most challenging, but also the most fruitful conversations. Starting to get to know someone by dating long distance means that everything must be intentional. We never have been afraid to dig deeper into our beliefs from the get-go and it’s led to a strong foundation that now we’ve been able to build on and really have fun with. Ben’s leadership in faith is one of the things Jess is most attracted to about Ben.

What would you say is the most important quality of a healthy, lasting relationship?

Ben – “A mutual desire to see the other person be their fullest and most joy-filled self. Serving each other well, and valuing the other person’s needs and wants as highly if not higher than your own.”

Jess – “I agree with Ben, and I would add honest communication. Clear communication has been the hardest thing for me, but it has also been the most important thing for our relationship. A lot of our conversations happen on the phone or facetime and I’ve never been great at expressing myself, so I’m getting better at speaking what I am thinking.”

Ben—has being in the public eye when it comes to your relationships shaped the way you pursued Jess?

“I think I knew I could be a little more forward because she wouldn’t think I was super big creep in the beginning. But,  because I was on a show that involved dating and relationships my past would be something that would be brought up and talked about, so we have to be more considerate, communicative, and intentional. And I have been especially attentive to always make sure that Jess knows that she is the one I care about. But we both have learned to understand that the public will always be a part of our relationship because I dated on TV.

What keeps your relationship grounded?

We don’t expect or believe that either of us are perfect, and we love the quirkiness that we each have.

What efforts do you make to continue to get to know each other better?

Face to face time when we say no to distractions. For example, this weekend we carved out time to lay on the couch and have dinner in, just the two of us. It’s rare that we are ever in our home towns when we are together. While doing distance, it’s easy to get caught up in the excitement of travel and events, but we have learned to take time to slow down and just enjoy being alone together. Sometimes those are our most exciting nights, which is honestly really lucky. It’s fun to look forward to a night on the couch with your significant other rather than wishing you could do something more. Hopefully, we’ll always appreciate the presence of each other! Another way we continually get to know each other is by not being afraid to have hard conversations and we both feel the freedom to ask and say whatever is on our mind.

How do you make long distance work?

Talking on the phone and facetime rather than texting. From our first visit, we made a promise not to be sad to leave each other but instead leave looking forward to the next time we’ll see each other. We never leave a visit without having a next one planned, that’s a tip from one of Jess’s friends who started dating her now husband by being long distance. We learned early on that if we go longer than two weeks without seeing one another, it gets super hard so we try to not go that long. We’re really lucky that we both have flexible jobs that allow a lot of travel, so our distance doesn’t seem as tough.

How do you support each other in what God calls you to do?

Ben – “I fully trust in Jessica’s intentions and her heart, so when she pursues something I never want to be a boundary, but I want to find a way to be a facilitator and helpful partner to motivate her to continue to move forward. I believe that she has prayerfully considered her passions and her heart to know that what she’s doing is her calling.”

Jess – “I would rather see Ben every 2 weeks and have him at his fullest self, than see him every single day drained and feeling purposeless. He has been given an incredible platform that I think he has used in a way many would not choose to use it. I believe in everything he does and that he recognizes that he wouldn’t have any of this if it hadn’t been the Lord’s plan. With that, I know that God is going to continue to bless his efforts and I get so excited to see how he will use any new opportunity he gets. Being Ben’s biggest cheerleader is something I take a lot of pride in. I know he has a lot of fans, but I can guarantee that I’m the biggest!”

What do you hope people see when they look at yall’s relationship?

Realness. A genuine desire to show the hard parts and the good parts of a relationship. We hope they see  vulnerability and not something that’s picture perfect all the time. We hope to prove that love is an incredible decision and that a healthy relationship takes work! We wouldn’t change anything about our relationship, but it is hard being apart and a keyword is “intentionality.”  We get to have a lot of cool experiences together, but the best parts aren’t documented and we hope that people remember that. Our alone time and privacy is where our favorite moments happen. We hope they see Christ in our relationship and a joy in seeing one another succeed.

Ben found Jess while scrolling through Instagram in a hotel room in Nashville, TN. There’s not really a reason why they should have found each other – Ben is best known for being the Bachelor on TV and Jess was working in a sales job. We attribute our relationship to the Lord just knowing we would work together as a team. It’s been almost a year of dating and we are each other’s best friends, cheerleaders, and challengers in life!

If you’re looking for more great content, check out a recent post from another Bachelor contestant, Heather Martin, on the ways that God is using all things to shape her life!

More posts by Ben and Jess